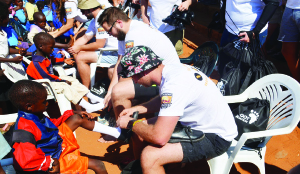 •A GROUP of about 200 volunteers from more than 25 countries across the world under PutFoot Foundation, in partnership with Livingstone’s Victoria Falls Water Front, yesterday donated 365 shoes valued at K43,800 to pupils at Kamwi Primary School in Mukuni chiefdom in Kazungula District in Southern Province. Above, some volunteers help the pupils to put on the shoes. Picture by BRIAN HATYOKA

A GROUP of about 200 volunteers from more than 25 countries across the world in partnership with Livingstone’s Victoria Falls Water Front have donated 365 shoes valued at K43,800 to pupils at Kamwi Primary School in Mukuni Chiefdom in Kazungula District of Southern Province
The volunteers, who are part of the PutFoot Foundation Rally, also donated pens, socks, crayon, soap and books.
Speaking during the handover ceremony yesterday, PutFoot Rally Foundation organiser Daryn Hillhouse said his organisation was committed to supporting vulnerable pupils in Africa.
Mr Hillhouse said his entity was also promoting tourism and proving a point that it was easy to travel within Africa.
“It is easy to travel in Africa some people say it is expensive and complicated. People in South Africa always go to Europe for Holidays and yet there is an opportunity to come here to Zambia and enjoy the vast tourism products.
“It is safe here in Zambia and I wish more people can come to this beautiful country and enjoy the country’s tourism,” Mr Billhouse said.
He said a lot of international tourists and guests usually come to Africa but they don’t give back anything to the local communities.
“This is our six time we have been to Zambia to help school going children in rural areas. We are trying to find schools where children need help.
“We have more than 200 volunteers from more than 25 countries around the world namely Brazil, Germany, Netherlands, Australia, India, America, UK and South Africa just to mention a few,” he said.
Senior Chief Mukuni’s Prime Minister Stanley Syachilubi said the donation was a wonderful gift to rural pupils.
Mr Syachilubi, whose traditional title is Mweendambeli, said most pupils in the walk were walking for longer distances on bare foot to access the school.
“We hope that  other organisations will come on board and help rural schools,” Mr Syachilubi said.
Victoria Falls Water Front operations manager Tony King said his organistion was happy to partner with PutFoot Rally Foundation to assist the pupils.
“We started working with PuFoot Rally six years ago. Our role has been to identify vulnerable children in the community as well as measure them and organise their shoe sizes then send the details to South Africa to enable the organisation buy the shoes,” Mr King said.
Kamwi Primary School Head teacher Davies Muleya said it was the first time his School had received an amazing support from volunteers across the globe.
In a vote of thanks, Kamwi Primary School pupil Linda Zilombo thanked Putfoot Rally for the donation.