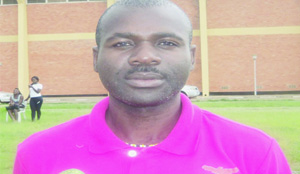 THE family of the late Dennis Lota have said a decision has not yet been reached as to where the former Chipolopolo star would be buried.
Lota, 40, died at Hellen john Hospital in Johannesburg, South Africa from suspected malaria but confusion arose between the Zambian and South African families as to where burial for the former Power Dynamos and Zanaco striker would take place.
But John Mphatsoe, who is the family spokesperson, said in an interview yesterday that the families will today meet with the Zambian High Commission in South Africa to seek guidance on the matter.
Mphatsoe said a decision on where Lota would be buried has not been set and dispelled media reports that suggested that burial would take place in South Africa.
He said Lota’s sister, Rose, is in South Africa to represent the interest of the Zambian family concerning burial arrangements.
Mphatsoe, who earlier said the late Moroka Swallows assistant coach will be put to rest in Johannesburg where his wife and children are, surprisingly changed his statement saying the family had not yet made a decision on the date and burial place.
“Nothing has been finalised yet and as a family we will release the details on the burial after meeting with the Zambian High Commission here where we expect to chat the way forward. Otherwise both families will be represented,” he said.
Mphatsoe further said it was not true that the families were embroiled in a dispute on where the Lota would be buried.
He also lashed out at reports that had claimed that Lota had denounced his Zambian citizenship saying it was false.
Mphatsoe, however, said the widow’s family will, during the meeting, take into account its culture especially that the couple had been married for over ten years.
“As we formalise everything concerning the burial at the meeting tomorrow (today), we will consider the fact that Lota had been married to a South African woman for over ten years and there are children, so we will also try to follow our culture,” he said.
During his time in South Africa, Lota starred for PSL clubs like Orlando Pirates, Mpumalanga Black Aces, Witbank Aces, Moroka Swallows and Dangerous Darkies before becoming Swallows’ assistant coach.