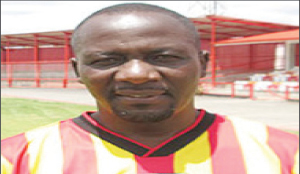 NKANA face Mbabane Swallows today at Somhlolo Stadium in Manzini targeting for a flying start to end their 12-year absence from continental football.
The Kitwe giants take on hosts Swallows in a 2014 CAF Champions League preliminary round, first leg match also looking to maintain their 32-year unbeaten record against Swaziland opposition.
Nkana coach Masauso Mwale said it was cardinal that his side leaves Swaziland with a vital away win to take back for this Saturdays return leg match at Nkana Stadium in Kitwe.
And half of Mwale’s side would be playing continental football for the first time like star striker Ronald Kampamba, who was barely 10 years old the last time Nkana played continental football in 2002.
“I have got a team that is both experienced and raw in this competition but would like to think that those players that are raw have had that exposure at international level. Most of them have played at Under-23 and Under-20 I and I want to think that is a good thing for us,” Mwale said.
“I want to believe that the exposure some of them have had at the national team will be vital for the game against Swallows. We have also trained outside against sides like TP Mazembe so they know what to expect,” he added.
Kampamba, who is yet to open his 2014 goal account, will start in attack where he will partner Francis Kombe who is very familiar with continental football from his Power Dynamos days 10 years ago.
Goalkeeper Charles Mweemba, defenders Christopher Munthali and Donashano Malama, who will be making their Champions League debut, should start together with midfielders Kelvin Mubanga and Captain Sydney Kalume.
Meanwhile, Swallows coach Hlope Nyanga said he was seeking a giant-killing act against a Nkana side that has never drawn or lost away in Swaziland in three previous visits.
“We believe there is always a first time for them to lose and we believe it should be us to do it. We would be proud to win and be the first Swaziland team to beat them,” Nyanga said.
However, Nyanga has suffered setbacks with strikers Sabelo Ndzinisa and Ghanaian Mike Mohammed both injured and expected to miss the first leg.
And so the pressure for goals will fall on striker Felix Badenhorst while Nyanga will bankon the creativity of veteran Swaziland international midfielder Tony Tsabedze to push their cause for a vital home win.
Winner over both legs will face the victor of El Merriekh of Sudan and Ugandan club, Kampala City Council, who met last night in their first leg game in Khartoum.