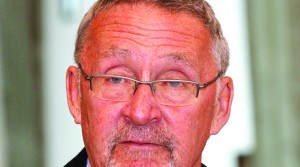 VICE-PRESIDENT Guy Scott has reiterated that there is unity among senior Patriotic Front (PF) party officials and has dispelled rumours of infighting.
In another development, PF chairperson for elections, Silver Masebo said candidates that  do  not hold any position in the party cannot be allowed to stand in the provincial executive  elections.
Speaking during the Copperbelt PF conference at Hindu Hall in Ndola yesterday, Dr Scott said there was unity in the party, dispelling perceptions by opposition and other party members.
The Vice-President, however, urged party members to stop listening to rumours but instead focus on organising the party in readiness for 2016.
Dr Scott said President Michael Sata would still be the party leader in the 2016 tripartite elections and urged party members to continue supporting him.
“President Sata has not endorsed any one to the position of president in the 2016 elections,” Dr Scott said. “He is still the president of the party, let us all continue with the party slogan which says ‘2016, President Sata’.
Speaking at the same function, Ms Masebo said that candidates who did not hold any position in the party would not be allowed to stand in the provincial executive election.
Ms Masebo, who is also Minister of  Arts and Tourism, indicated that 2016 was a difficult year for the party for elections  and urged delegates not to vote for teams but for candidates that  would make the party strong.
She said the party depended on the Copperbelt Province, hence the need for a strong and vibrant leader who would organise the party in readiness for 2016.
Stardy Mwale and Richard Musukwa were vying for the position of chairperson, and Nathan Chanda and Jones Kaliati for the youth chairperson position.
Hilder Kawesha, Selita Chisanga, Mary Banda Mulenga and Angess Chomba were vying for the women’s chairperson position at the voting, that was underway by Press time.