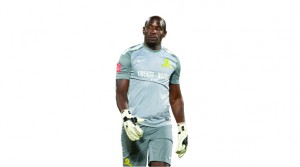 WITH the 2018 World Cup qualifiers starting in two months, Chipolopolo first choice goalkeeper Kennedy Mweene is reportedly considering leaving his club Mamelodi Sundowns for first team football elsewhere.
South Africa’s Soccer Laduma reports that Mweene has become frustrated at Sundowns due to lack of game time and wants to revive his career at a different club.
Mweene, who has dropped in the pecking order, is now Sundown’s third choice goalkeeper behind Denis Onyango and Wayne Sandilands.
The 2012 Africa Cup winning goalkeeper only made six appearances for the PSL Champions last season.
Despite lack of game time, Mweene has remained Chipolopolo’s first choice with little competition from local goalkeepers in the Zambian league.
With the Football Association of Zambia about to employ a new coach to guide the Chipolopolo through the World Cup qualifiers, Mweene would consider getting game time to secure his position in the team.
Sources from South Africa indicate that Golden Arrows, Maritzburg United and Cape Town City are all eyeing the shot stopper.
Efforts to get a comment from Mweene proved futile as his mobile phone was unreachable by press time.
And SANDRA MWILA writes that FAZ will next week submit to Government the names of the Local Organising Committee (LOC) for the Africa Youth Championship that Zambia will host early next year.
Cabinet has already approved the hosting of the 2017 Africa Youth Championship.
FAZ general secretary Ponga Liwewe said in an interview on Wednesday in Lusaka that preparations were on course to host the tournament.
“We want to host a world-class tournament.  The highest quality tournament, the best for the African platform,” he said.
The committee’s responsibility will include looking at key issues such as infrastructure, medicine, security among others and bringing on board the corporate world to fund the activities of the committee,” he said.
He said the Football House is working hard to come up with a formidable under- 20 team that will bring desired results to the nation.
Zambia finished fourth at the 1999 and 2007 tournaments in Ghana and Congo Brazzaville respectively to qualify for the World Youth Championship.