By JULIUS PHIRI in Katete – 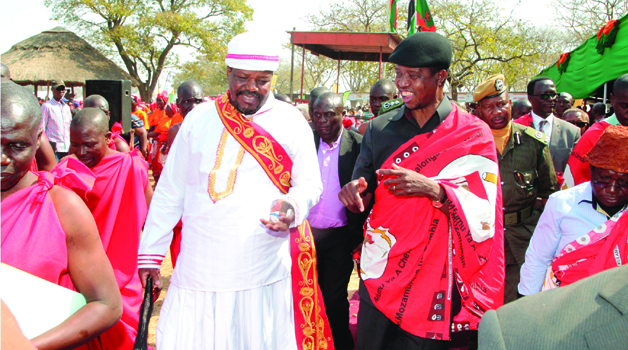 PRESIDENT-ELECT Edgar Lungu has appealed to Zambians and the clergy to commit the nation to prayers for peace to continue prevailing in the country.
Mr Lungu said Zambia deserved peace to enable the citizens to conduct their business without undue pressure.
The President-elect was speaking when he graced this year’s Kulamba traditional ceremony of the Chewa people of Zambia, Malawi and Mozambique in Katete yesterday,
He said violence had no place in societies, hence the need for Zambians to strongly condemn the barbaric acts which caused misery for the people.
Mr Lungu said the Government could not allow acts of violence to cast a shadow on the much-cherished peace in the country.
He said it was important for Zambia not to lose sight of its democratic ideals.
Mr Lungu said it was against this backdrop that the citizenry should observe the ‘One Zambia One Nation’ motto.
“There is need to embrace this motto which was coined by our forefathers in an effort to ensure that peace and unity prevailed over the country’s 73 ethnic groups.
“Our forefathers envisaged unity in diversity as a hallmark for us to develop our nation,” he said.
Mr Lungu said unity defined the Zambian people, and that there was need to seriously nurture it for everyone to successfully forge ahead.
“All of us have a duty to cherish this unity.  We all have a duty to plant seeds of unity across our nation and beyond,” Mr Lungu said.
He said the traditional leadership had a mammoth responsibility to preach peace and stability to the people.
The President-elect said the Kulamba traditional ceremony was one such platform where people could promote unity.
He said it was imperative that Zambians continued preserving the peace which was attained at great sacrifice by the forefathers.
Mr Lungu said for many years, Zambia had maintained its celebrated status as a peaceful country founded on the ‘One Zambia One Nation’ motto.
He said divisions should not be tolerated because it was a threat to the moral fabric as well as the Zambian culture.
He was happy that the traditional leaders had continued to denounce political violence.
Mr Lungu said the role of chiefs could not be over-emphasised, as they had a primary duty of imparting the beautiful local culture to generations and shaping it to fit the current realities.
He said traditional ceremonies did not only remind the people of their origins, norms and values, but contributed greatly to the promotion of national unity, peace and harmony.
The President-elect said culture underpinned the daily life, and that a nation without history, origins and culture was like a tree without roots.
“This is why we consider traditional ceremonies as crucial cultural activities to the core of our existence,” he said.
Mr Lungu said societies that had weak cultural linkages were at risk of endless strife which negatively impacted on development.
He said it was for this reason that the three countries should make significant strides to promote peace and unity through art and culture.
He paid tribute to Paramount Chief Kalonga Gawa Undi for what he described as a wonderful ceremony which brought the three countries together.
“I wish Your Royal Highness continued good personal health as you endeavour to provide wise counsel to Mozambique, Malawi and Zambia in matters of culture, social and economic development,” Mr Lungu said.
Mr Lungu also paid gratitude to the Zambian people for upholding peace during the August 11 general elections.
He said the Kulamba traditional ceremony had gone down in history as a tremendous achievement and the greatest demonstration of cultural freedom of the three countries.
Notable among the people who attended the ceremony were the Malawian Minister of Sports and Culture Grace Chiumia, Tete Province First Secretary Lina Portugal, newly-elected members of Parliament, former Home Affairs minister Lameck Mangani, Eastern Province Permanent Secretary Chanda Kasolo, provincial Patriotic Front chairperson Andrew Lubusha and MMD leader Felix Mutati.