By SYLVIA MWEETWA –
A TWENTY-SEVEN-YEAR-OLD Congolese national has been apprehended in Chingola after he was found in possession of 83 elephant tusks stashed in his house.
The confiscated tusks represent more than 42 elephants killed.
This was during an operation conducted in the early hours of yesterday, according to Copperbelt Police Commissioner Charity Katanga.
Police also recov 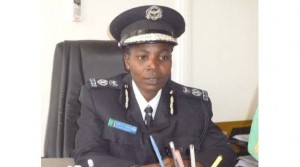 ered a Zesco transformer. Two of the arrested man’s colleagues managed to escape.
Ms Katanga identified the suspect as Fabricas Chowilupwishi, who had packed the illegal merchandise in assorted bags and sacks in a house on 13th Street.
“We are still trying to establish where he got such a huge number of tusks,” she said.
Meanwhile, police have intensified investigations into the spate of robberies in Kitwe in which  thousands of Kwacha have been snatched at  gunpoint.
Ms Katanga assured that the police was on high alert and was working with various business owners to stop the robberies.
“We are committed to ensure that these robberies are stopped, but we are also not ruling out the possibility that most of these cases could be inside jobs,” she said.
She said the business houses were working with the Criminal Investigation Department  (CID)’s  to  tackle the problem.
On Sunday, armed robbers attacked Chinese nationals who had two safes, containing more than K100,000.
The attack happened at Camco Equipment situated on the Kitwe-Chingola Road near Copperhill Mall.
The safes contained K40,000 and US$7,000.