By DELPHINE ZULU –
INSPECTOR General (IG) of Police Kakoma Kanganja has told a Lusaka magistrate’s court that he is still hurting from allegations made against him in Facebook posting by Chilufya Tayali that suggested he had something to do with the Mongu incident over which opposition leader Hakainde Hichilema has been accused of treason.
Mr Kanganja said  Tayali’s posting made in April in the aftermath of the incident involving Mr Hakainde’s motorcade and that of President Edgar Lungu as they headed for the Kuomboka ceremony, was ” 100 per cent criminal” and a clear indictment of him to be charged with treason. 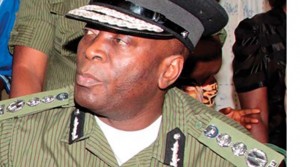 Mr Kanganja testified that the posting brought ridicule, hatred, contempt and uproar in society as most people were calling for his resignation.
“I was shocked when I read the article. It is still paining me. I swore to protect the Constitution of Zambia and the President as well as everyone, Hichilema included. This article brought hatred were people started calling for my resignation,” he said.
Tayali has been charged with the offence of libel, under section 191 of the Penal Code Chapter 87 of the Laws of Zambia.
This is a substituted offence and when the matter came up yesterday for opening of trial, the accused took a fresh plea and denied the charge.
Particulars are that Tayali on April 13, 2017 with intent to defame Mr Kanganja did unlawfully write and publish on social media, Facebook a defamatory statement saying:
“ Kanganja is just covering his inefficiency to charge Hakainde Hichilema with treason, otherwise he should be an accomplice, where was his police to clear the way long before?
“That should have never happened, but maybe Kanganja planned it that way to kill the President or frame Hichilema…which statement injured the reputation of Kanganja by exposing him to hatred, contempt and ridicule,” read the particulars of the offence.
The IG said he became aware about the writings through numerous phone calls from a cross-section  the society and was forced to ask for a printout from Zambia Information Communications Technology
Authority (ZICTA).
And in cross-examination Tayali sent the court into laughter when he said that he felt not protected by the court as he felt intimidated to cross-examine the IG because of the way he was responding.
Magistrate Felix Kaoma then told him that he was protected by the court and asked him to go ahead.
The accused applied for an adjournment because he wanted to come with some audio and visual recordings to defend himself.
Matter comes up on July 17 this year for continued trial.