By MARTIN NYIRENDA
WOMEN are possessed with the passion of change in the astute lives of communities and the world, something that cultivates a sharp-witted life where society has to determine itself.
In Zambia and elsewhere, agriculture is one of the chief engines of sustainable national development, an ingredient of poverty reduction at household level.
Today the Government is frantically eyeing economic platforms that bubble with elements that catapult the sector into the mainstay of the lives of the locals. 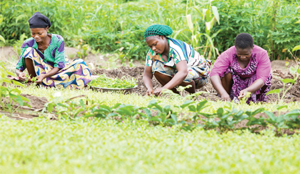