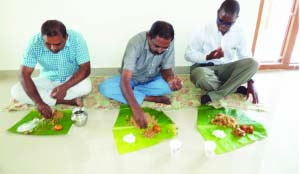 • CHILESHE sharing a meal with locals of Coimbatore in India.

By REBECCA MUSHOTA –
‘SAVED by the bell’ phrase comes from possibly two scenarios.
The first scenario is that of a boxer who is in danger of losing a bout and is ‘saved’ from defeat by the bell that marks the end of a round.
The second scenario pertains to a person getting saved from being buried alive by using a coffin with a bell attached to it as things were done in the 17th century in some parts of the world.
The idea being that, if they were buried but later revived; they could ring the bell and be ‘saved’ from death.
Regardless of how the phrase came about, Morgan Chileshe of Ndola says he was saved by the bell in November 2013.
Morgan, 31, underwent an eye operation in November last year which thankfully restored his sight and more importantly for him, saved his marriage and just by the bell.
The problem for him was that his wife is deaf and therefore it could have been a catastrophe if he went blind.
The couple could have found it difficult to live together with the husband being blind and the wife being deaf.
Morgan was born on the African Freedom Day (May 25) in 1981 in Kitwe Central Hospital to Mr Paul Chileshe and Ms Victoria Banda.
He said because his parents were not married, he ended up living with his mother who he said shouldered the responsibility of raising him at that time.
He started his Grade one in Katete District at Kanjeza Primary School in the Eastern Province.
He later started having sight problems.
At the age of five, he had a cataract in his right eye and was admitted to Kitwe eye ward where he was operated on in what was said at the time as a successful operation.
While in Grade one, Morgan’s mother died, and he moved in with his grandmother who was a marketeer in Kitwe.
He went to Kwacha Primary School.
When Morgan was in Grade seven, he moved in with his father and completed his Grade 12 lessons in 2000 in Chililabombwe.
After school, Morgan pursued a marketing and public relations course at the Zambia Institute of Business and Industrial Practice (ZIBSIP) in Kitwe.
In 2005 to 2007, he went to Kitwe’s College of Education.
This is where he found the apple of his eye, Ngambo Sakuluka.
Morgan says he believes Ngambo was directed to him by God.
“This lady happens to be disabled who at the time was pursuing a teaching course.
She is deaf and dumb,” Morgan said in an interview.
He said it did not matter to him that she was both deaf and dumb.
Morgan said most of his family members however, did not show support for his desire to marry Ngambo.
Thankfully, there is an aunt of his, Esther Kachimba who gave him a go-ahead to be with the love of his life.
They got married.
In 2008, Morgan and Ngambo were employed as teachers in Masaiti District on the Copperbelt.
The couple in 2012 went to study at the Zambia institute of special education to specialise in teaching disabled pupils.
Towards the end of the second year, Morgan developed eye problems, again.
The problem in his right eye was so intense that he missed his mock examinations.
With the help of the college authorities, Morgan went to Chawama Eye Hospital on several occasions.
He then went to Lusaka eye hospital where tests were conducted on his eye and the results showed that Morgan needed to undergo a corneal transplant on the eye. They said he had a corneal ulcer.
The operation, he was told, could not be done in Zambia but that he could do it in South Africa and India.
Morgan went to several private clinics in Lusaka and he was told the same thing over and over again.
“My problem was money. I couldn’t afford to travel to South Africa or India and more so go for an operation there. I simply did not have that kind of money,” he said. 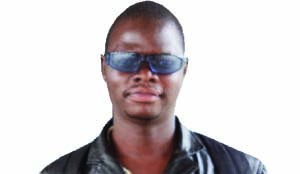 Morgan said he was desperate for help and running out of time.
After the institution closed, Morgan went back to Masaiti and had not written his mock exams.
Before he went for his teaching practice at Kansenshi Primary School in Ndola, he went back to college to sit for his mock examinations which he did with one eye.
Morgan went to Beverly Eye Clinic in Ndola where he saw a specialist, Davidson Kwendakwema.
This was after the problem had gone on for five months.
Morgan told Dr Kwendakwema that he feared that if he went blind, communicating with his deaf wife would practically be impossible.
On one of his visits to Dr Kwendakwema’s clinic, the doctor said the danger of a corneal ulcer was that it was most likely going to affect the other eye if it was not treated immediately.
Dr Kwendakwema advised Morgan to go to India as soon as he could for an operation because he was at the edge of blindness.
The doctor then wrote a note of appeal for financial help for Morgan to take to Bhatt Bharat, also of Ndola who belonged to the Hindu Association of Zambia.
Morgan went to Dr Bharat who took his appeal to the Hindu Association of Zambia.
To Morgan’s relief, the Hindu Association of Zambia gave Morgan $7,000 to cover all his travel expenses to India and back.
Dr Bharat also helped single eyed Morgan get a medical visa.
Morgan’s aunt, Mrs Kachimba helped with the medical expenses that also amounted to another $7, 000.
The Basic Education Teachers Union of Zambia (BETUZ) released some pocket money.
On November 14, 2013, Morgan travelled to Coimbatore in India to Sankara Eye Hospital.
Morgan underwent a surgery called penetrating keratoplasty on November 16, last year.
He said he had two challenges while in India, the language and the food.
Morgan said most of the hospital staff only spoke Tamil and the hospital is a vegetarian hospital and therefore only served vegetarian meals.
Thankfully, the 15 days Morgan spent there, he managed to get over the language and food challenges.
Morgan travelled back on November 28, 2013 and was advised to go back nine months after for review.
He said his life took on a positive turn after the operation and he wrote his final examinations.
“I thank God almighty for using the Hindu Association of Zambia, to show concern for me and my wife. I thank God for BETUZ, the District education board secretaries of Ndola and Masaiti, men of God Pastor Charles Mumba, Prophet Mulenga of Twapia, Dr Bharat and Dr Kwendakwema,” Morgan said.
Morgan’s sight and marriage were fortunately saved just in good time.
For now, Morgan and Ngambo are waiting to be deployed to a school to teach disabled pupils.
They will be starting another chapter of their lives.
They are looking forward to this chapter because of Morgan’s repaired eye and a saved marriage.