By STEVEN ZANDE and CHUSA SICHONE –
PRESIDENT Edgar Lungu has accorded late former Health minister Joseph Kasonde, who will be put to rest today, a State funeral.
The Head of State also declared today as a day of national mourning in honour of Dr Kasonde.
This is according to a statement issued in Lusaka yesterday by Secretary to the Cabinet Roland Msiska.
“Members of the public are advised that in view of the Day of National Mourning, today all flags will fly at half-mast and programmes of entertainment nature on both radio and television should be cancelled or postponed,” Dr Msiska said. 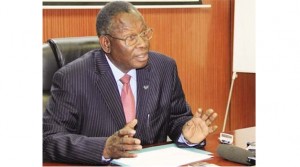 Cabinet urged members of the public to cancel or postpone programmes of entertainment nature which had been scheduled for today in respect of Dr Kasonde.
Dr Msiska announced that the National Mourning would run from 06:00 hours to 18:00 hours.
Burial of the late Dr Kasonde would take place at the Leopards Hill Memorial Park in Lusaka and it would be preceded by a Requiem Service at the Cathedral of the Child Jesus at 10:00 hours.
Meanwhile, Vice-President Inonge Wina says the medical profession has been robbed of a hard working physician following the demise of Dr Kasonde.
Ms Wina said the death of Dr Kasonde had also deprived the country of a selfless man who was dedicated to serving others.
According to ZNBC news monitored in Lusaka on Sunday evening, Ms Wina said this after visiting the funeral house.
“I do know that the medical profession has lost a diligent physician and not only that, I think the whole country has lost someone who was dedicated to serving others in his profession,” she said.
Ms Wina said Dr Kasonde was leaving a big legacy as he served both locally and internationally (United Nations system).
Ms Wina said as a member of Parliament, Dr Kasonde exhibited professionalism even in his debates laced with a great sense of humour and was loved for that.
She said Dr Kasonde cared for others because he had a human heart, even beyond his medical profession.
Earlier, Ms Wina consoled Dr Kasonde’s widow, Mary, and his children besides signing in the condolence book.
Ms Wina was accompanied by, among notables, Housing and Infrastructure Development Minister Ronald Chitotela, Northern Province Minister Brian Mundubile and her senior Private Secretary Sheila Siwela.
Dr Kasonde,79, died on Friday last week after an illness and leaves behind a wife, five children and several grandchildren.