By STEVEN ZANDE –
ZAMBIA will effectively combat child marriages and cases of defilement once the consent age to marry is raised to 21 from the current 18 as announced by Gender Minister Victoria Kalima.
Ms Kalima said in Chipata at the weekend that the Government was revising the Marriage Act, a decision that will raise the marriage consent age to 21 from the current 18, and that a person found having carnal knowledge of a person under 21, would face defilement charges. 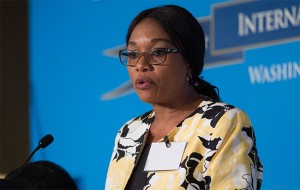 The Non-Governmental Organisations Coordinating Council (NGOCC) has welcomed the pronouncement, describing it as a positive move towards fighting early marriages and defilement, which have now become a great concern to key stakeholders, including the Government.
NGOCC Board chairperson Sarah Longwe said the revision would also enable girls undergo enough training which would enable young women manage their homes and sustain themselves in an event of a separation either through divorce or death of a spouse.
“The pronouncement is long overdue and it will help save lives. At 21 a woman is mature enough to make quality and informed decisions,” Ms Longwe said in an interview yesterday.
Ms Longwe said existing laws had not adequately helped in combating cases of defilement and rampant child marriages in communities, especially in the rural areas where girls did not stay in schools long enough to acquire an education and access good jobs for sustainable livelihoods.
She said the law would be progressive and the girls with ambition to get married at a tender age would have to respect the law when it was effected.
Ms Longwe said for some time now, the NGOCC had been calling for the proposed law which would increase the marriage age, thereby helping safeguard the welfare of women in communities.
She said parents would no longer have the final say on when their children got married as this had in the past compromised efforts aimed at combating vices of early marriages and child defilement.
Ms Longwe said women should be given enough opportunity to develop their own capabilities for them to be able to take up the responsibility of raising income to feed their children and dependents.