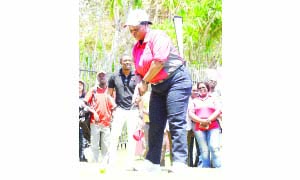 By SANDRA MWILA –
FIRST Lady Esther Lungu yesterday showcased her golfing skills when she graced the two-day Esther Lungu Foundation Trust fundraising golf tournament at State House in Lusaka where more than 150 players are taking part.
The tournament is aimed at raising funds for the less privileged in the rural areas.
The First Lady expressed happiness with the overwhelming response from the corporate and that the project would focus on rural areas where most people do not reach out to provide health facilities, equipment and education to the girl child.
She said the girl child had a number of challenges in accessing education because of lack of sanitary, child labour, early marriages, defilement and economy.
“I just want to say thank you for having a successful tournament, I am overwhelmed by the response of the donors, organisers and state house team,” the First Lady said.
She said the parents of the girl child where also key to be empowered because through them they can educate their children.
“The mother is also key, if she is empowered then she can take her children to school. We also have widows and single mothers that need help, no one should be left behind,” she said.
The First Lady noted that as much as focus on the girl child, the boy child should also not be left behind.
“We are also looking at the boy child; we want both children to move at the same time. In the future we want both the female and male to get an education,” she said.
Meanwhile, organising committee chairperson Roy Penny praised his team saying it had done a good job and would be accountable of every cent from the corporate world.
“The First Lady is doing a wonderful job with her project to help the less privileged and also the organising committee has done well to raise funds and we’re talking double of what was raised last time.” Penny said.
The prize presentation ceremony will be held today when the event comes to a close with various prizes on offer for the deserving players.