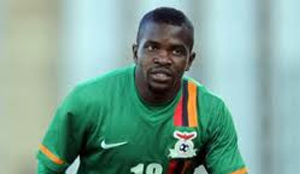 By SANDRA MWILA –
FORMER national team midfielder Clifford Mulenga has blamed selfish agents for not reaching his full potential in his career.
Mulenga who plays for Jomo Comos told Kickoff Magazine that agents should stop being selfish and put player’s needs ahead of theirs.
He said agents should be like father figures to players and give proper guidance in their careers.
“Agents should stop being selfish and putting their needs before players’ needs. Agents promise a lifetime of greatness and as soon as contracts are signed, players are neglected and are left alone to deal with the money issues and problems with their clubs,” he said in the January edition of Kickoff Magazine.
Mulenga added that there were a number of greedy agents who are not interested in the wellbeing of players but business interest.
He said he was a talented player and would have competed with the likes of Cristiano Ronald and Lionel Messi had he received proper guidance.
“I am not out to blame anyone that managed or was around me, but I feel like people were just excited with me playing football, scoring goals and dribbling people. They forgot that there was something bigger than that. Had I gotten proper guidance I would be competing with Messi and Ronaldo. I am not bragging, but I know that God blessed me with great talent many people would die to have,” Mulenga said.
Mulenga has had stints with Mbombela United, Swallows, Ajax Cape Town, Black Aces , Supersport United, Blomfontein, Orgete and Bidvest Wits.
He was voted African Young Player of the Year in 2007 but is remembered for being sent home from the Gabon-Equatorial Guinea African Cup of Nations (Afcon) in 2012 by then coach Herve Renard after breaching camp rules. His teammates went ahead to lift the cup.
Mulenga had a stint at Zambia Super League champions Zesco United but failed to hold down a place hence cutting short  his stay in Ndola.