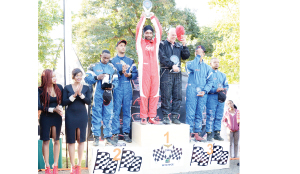 By MWANGALA  LISELI –
KENYA’S Jasepreet Chatthe put up a dominant display to win the Automotive Equipment 2015 Zambia International Motor Rally after finishing some good four minutes ahead of Zambia’s Jassy Singh.
Chatthe’s dominant form saw him post two hours 40 minutes and 13 seconds to claim first place podium finish in the rally that has been largely dominated by Zambians.
The Kenyan also extended his lead on the FIA African Rally Championship (ARC) drivers standing to 50 points with Jassy moving to 38 points while his younger brother Muna Singh Junior is now on 30 points after the third leg of the 2015 ARC.
Chatthe received K8,000 for his top place finish while national champion Jassy, who timed two hours 44 minutes and 27 seconds to finish second, pocketed K6,000.

Jassy said he was not disappointed with his performance especially that his car gave him problems on Day Two of the rally.
“I am happy to finish second especially that we had problems with the car but I am still determined to challenge for the African title. Chatthe is a strong contender but I will work hard to ensure I catch up with him,” said the 2013 ARC champion.
Last year’s Zambia International rally winner Essa was third with a time of two hour 43 minutes and 46 seconds and got K4,000.
Muna Singh junior was fourth clocking two hours 47 minutes and 53 seconds ahead of Miles Monge who drove two hours 51 minutes and 42 seconds with Jurgen Sauter following in distant sixth place after timing three hours 16 minutes and 46 seconds.
Zubair Essa finished on three hours 17 minutes and 48seconds with Toofail Dalal in seventh place timing three hours 17 minutes and 49 seconds as Kelvin Mhlanga clocked three hours 21 minutes and 12 seconds.
Meanwhile, Essa expressed sadness at finishing third as his target was to win the rally.
Essa, however, said he was not disappointed with his performance having come from a break and would concentrate in taking part in the remaining Zambia Motor Sport Association (ZMSA) national rallies and will try his luck at the ARC title next year if he gets a sponsor.
“I am disappointed to come out in third position because I am now used to finishing first. I will now focus on the remaining national rally championships and maybe next year, if I get sponsors, go for the ARC,” he said.
Muna Junior expressed happiness with his performance as he continued with his perfect debut in the ARC.
He said he would concentrate on the remaining national championships to gain more experience as he takes part in the continental championship.
Chatthe said he was happy with the victory but that there was still room for him to work hard f he was to win the ARC title. Gary Chaynes of Ivory Coast is the reigning continental champion.