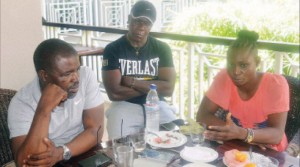 WORLD Boxing Council (WBC) bantamweight gold champion Catherine Phiri says she will cope with the huge task of defending her title within the next six months as well as writing her Grade 12 examinations.
Catherine said in an interview at Southern Sun in Lusaka yesterday that she will not defer her exams to next year but will sacrifice her leisure time in order to succeed in both fields.
She said her school (Great North Academy) is working out a system that will help her prepare adequately for the exams before the fight.
With the fight likely to be staged in July/August, Catherine will have at least a month or two to prepare before she writes her examinations that usually start in October.
“I will manage to handle both my school programme and prepare for the defence of my title in six months. My school is working out a mechanism that will help me catch up and also prepare for the exams.
“This is the time I would need to sacrifice my leisure time, no friends, strictly school and training for me to succeed in both my education and boxing career,” she said.
Catherine also disclosed that she was pondering on studying engineering and construction after completing her secondary education.
The champion said she was considering engineering because she has developed interest in the field because of working with Oriental Quarries.
The Zambia Information and Communication Technology Authority (ZICTA) in April last year pledged to sponsor Catherine’s tertiary education once she completes her secondary school studies.
“I am planning on doing engineering and construction. I might change, I might not. I am interested in construction because of Oriental Quarries and I have an idea,” Catherine said.
Oriental Quarries Boxing Promotions (OQBP) manager Christopher Malunga said the stable has ruled out lobbying for an extension for the title defence  because Catherine was capable of managing both.
Malunga said the stable understands that the Grade nine exams were different from Grade 12 examininations hence a special programme was being designed for Catherine.
“She will defend the title in six months, we will not ask for an extension from WBC. Catherine can manage both and a programme is being made to help her,” Malunga said.
Malunga said Catherine was guaranteed of a well paying job at Oriental if she pursues a career in engineering.