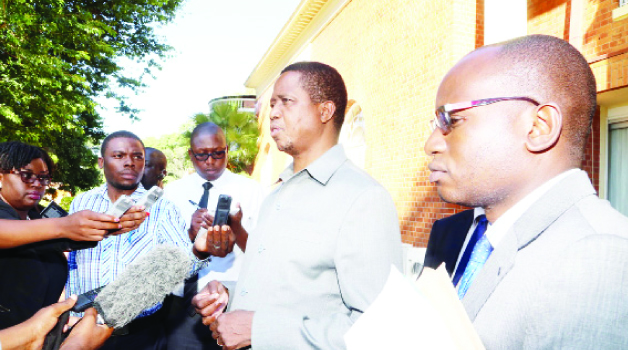 •PRESIDENT Edgar Lungu briefs journalists at State House yesterday on the Special Operational Order aimed at restoring law and order in parts of Lusaka, where suspected ritual murders have been recorded in recent weeks. On his left is his Special Assistant for Press and Public Relations, Amos Chanda. Picture by EDDIE MWANALEZA/STATE HOUSE

GOVERNMENT has deployed 440 soldiers to patrol the streets of Lusaka to curb the suspected ritual killings and the riotous behaviour that has rocked some parts of the capital city recently.
This follows a directive by President Edgar Lungu who made a special order to deploy the soldiers to patrol various townships of Lusaka after a spate of suspected ritual killings and riotous behaviour among the residents.
President Lungu said the directive of the special order was a normal reaction to an abnormal situation such as the one the country has experienced in the past few days.
“I have a duty as Commander in Chief to take measures and ensure that you go about your business in your daily lives without any hindrances. That is what I have done,” he said.
Most parts of Lusaka townships on Monday and Tuesday were thrown into chaos after residents ran riot looting shops and attacked foreigners in protest against the suspected ritual murders that have claimed six lives in the past two months.
President Lungu made the special order for the operation to address the challenge on Tuesday night.
The President was speaking when he addressed the media at State House yesterday.
Mr Lungu said the authorities would be monitoring and reviewing the special order on a daily basis.
He said the situation had already started to improve.
President Lungu said it was unfortunate that some people took advantage of the gruesome murders to attack foreigner’s, especially Rwandan people and looted shops.
He said Government has taken measures to mitigate the situation and protect people’s lives and property.
Mr Lungu said he was hopeful that there was no political element to the situation because it was wrong to gain political mileage through destroying people’s lives.
He said drastic measures would be taken if the riots were politically instigated, saying that what was important was to restore order.
The President urged the public to refrain from spreading rumours and taking the law into their own hands.
Meanwhile, Home Affairs Minister Davies Mwila told Parliament yesterday that among the 11 suspects that police apprehended in connection with the suspected ritual killings, two were foreigners, while nine were Zambians.
Mr Mwila said the soldiers have been brought on board to reinforce patrols and ensure peace and order was restored, in the streets of Lusaka.
“The soldiers have been brought on board to reinforce but will be withdrawn tomorrow (today) they are patrolling the streets with police officers,” he said.
He said this in response to MMD Mafinga Member of Parliament (MP) Catherine Namugala who wanted to know if the police had the capacity to quell riotous behaviour and investigate the ritual murders.
This was after Mr Mwila issued a ministerial statement on the suspected ritual killings and looting in the high density residential areas of Lusaka.
Mr Mwila told the House that, during the spate of the riotous behaviour, one person was burnt beyond recognition in Kanyama Township, while three Zambians were severely beaten and were admitted to the University Teaching Hospital (UTH).
“Sadly, one of the three Zambian nationals that were severely beaten in Kanyama has died,” he said.
So far 257 suspected looters have been apprehended and police have recovered some of the looted property.