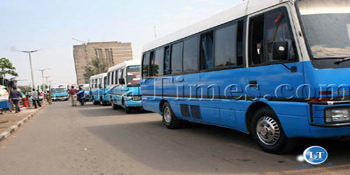 PUBLIC transport operators and consumers have joined initiatives to curb the spread of cholera in Lusaka, taking measures such as ensuring every bus has a litter bin on board.
This is according to a joint statement issued yesterday by the Bus and Taxi Owners Association of Zambia (BTOAZ), Bus and Taxi Drivers Association of Zambia (BTDAZ) and the Commuters Rights Association of Zambia (CRAZ).
BTAOZ Lusaka District chairperson Justine Chabala signed the statement on behalf of the association, while CRAZ president Aaron Kamuti and BTDAZ national secretary Sydney Mbewe appended their signatures on behalf of their
organisations.
The statement was also circulated to the ministers of Health, Local Government, Transport and Communications, the Lusaka Mayor and commanders of the Zambia Army, Zambia Air Force and Zambia National Service (ZNS) commandant.
According to the statement, every public transporter should forthwith implement the requirement of the Road Traffic Act Number 11 of 2002, in which Section 103 requires each public bus to be equipped with a litter disposal facility.
The organisations said they sympathised with the households affected by the cleanup operation in Lusaka by the Army, Air Force and ZNS officers but that the exercise was necessary to avert any further loss of life from cholera.
They hailed President Edgar Lungu and the Government for this measure.
“Having inspected the results of the operation, we urge our gallant defence force officers to with immediate effect start enforcing the requirement for every bus to load in and for every commuter to board buses from the three council gazetted bus stations (Kulima Tower, Millennium and Lumumba),” the statement read.
The organisations said due to the clamp-down on street vending, there was adequate space to accommodate all the buses in the stations and this would make it easy for law-enforcement wings to inspect and enforce the regulation.
Meanwhile, General Education Minister Dennis Wanchinga said all primary, secondary and tertiary schools in the country would remain closed, and re-open only as prescribed by the Ministry of Health.
Dr Wanchinga said this in Lusaka yesterday when he flagged off the distribution of water, sanitation and hygiene (WASH) materials worth US$75,000 to schools in Luapula and North-Western provinces.
The products, which included washing buckets and soap, were procured with support from the United Nations Children’s Fund (UNICEF) and UK Aid of the United Kingdom (UK) government under a Government programme dubbed ‘School health and nutrition’.