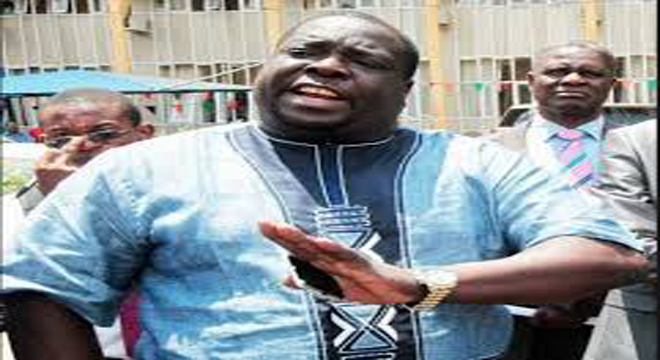 Chishimba Kambwili’s National Democratic Congress (NDC) has suffered yet another setback after Webster Katongo, its no-show candidate in next month’s Chilanga by-election and a host of others defected to the Patriotic Front (PF).
Mr Katongo announced his defection in Chilanga yesterday, throwing his weight behind the PF candidate Maria Langa in the race the fill the seat left vacant after the jailing of incumbent Keith Mukata of the opposition United National Development Party (UPND).
The development came just days after the entire Northern Province NDC team defected back to the PF.
Mr Katongo had been put forward by the NDC as the party’s candidate in the by-election but failed to show up on nomination day, costing the party the chance to contest the poll.
“I did not file my nominations because, after giving it serious thought, I felt that adoption by the NDC was in conflict with the visible national development programmes of the Patriotic Front that I wanted to complement by being an able representative of the people of Chilanga.
“I would like to officially inform the nation that I, Webster Katongo, am no longer a member of the National Democratic Congress and I am joining the Patriotic Front,” he said.
Addressing a Press briefing in Chilanga, he denied suggestions he had been threatened or bought by the PF to ditch the NDC, led by Roan member of Parliament Mr Kambwili, a former minister in the current PF government.
In response to questions from journalists, Mr Katongo described as untrue allegations that he was planted in NDC to destabilise the opposition political party, reiterating that his conscience could not allow him to file in his nomination papers.
Mr Katongo said he was raised in Chilanga where he had lived for more than 40 years and was aware of the problems that the people in the area faced and he was ready to help the residents in any way he could work with Ms Langa.
He confirmed also that some intruders deflated the tires of his vehicle at the weekend, but that he could not identify them because they bolted after he alerted the police.
Reacting to the development, NDC media director Emmanuel Malite said in an interview that the party was not shaken by Mr Katongo’s defection because it was an indication that the opposition party was becoming a threat and giving the PF “sleepless nights” since its arrived on the scene six months ago.Mr Malite said Mr Katongo’s failure to file in his nomination papers at the 11th hour and his subsequent had raised suspicion.
“If he really had issues with his conscience about being in the NDC, why was he still a member until the 11th hour when he failed to show up to file the nomination?”
The briefing was attended by a jubilating throng of Mr Katongo’s followers and defectors who were received by the PF Chilanga parliamentary by-election deputy campaign manager Geoffrey Chumbwe in Chilanga yesterday.
Mr Chumbwe, who is Chongwe Mayor, said Mr Katongo had made the right choice and that the PF was grateful for the move.
Mr Chumbwe said Mr Katongo was very free to work with the PF and that he would be incorporated in the campaign team because the ruling party had a duty to develop Chilanga constituency and the country.