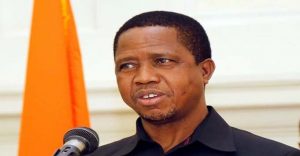 By GODFREY DUBE –
PRESIDENT Edgar Lungu is next month expected to grace the Sports Council of Zambia (SCZ) organised National Sports awards which are aimed at promoting sports excellence in the country.
Sports Minister Moses Mawere said yesterday that the hosting of National Sports Awards is a good way of inspiring youths in the country to take up sport.
Speaking during a press briefing, Mawere said the awards, scheduled for December 22 at the Mulungushi International Conference Centre, will recognise thirteen different award categories, an upgrade from last year’s eight.
“We will once again hold the National Sports Awards. The SCZ and various partners are spearheading the preparations of this important event. The awards are a formal way of recognising performance and achievements of sportsmen in the country,” he said.
Mawere called on the corporate institutions and individuals to support the important event.
“We have written to some institutions, and we are still calling upon the corporate entities to identify themselves with this important national event by considering partnering with us through sponsorships,” he said.
The thirteen award categories will include the sportsman of the year, sportswoman of the year, young sports man of the year, young sportswoman of the year and coach of the year.
Other awards will recognise the sports administrator of the year, sports journalist of the year print, sports journalist of the year electronic, team of the year, paralympic sportsman and woman of the year, , medal of honour individual/institution/sponsor and the President’s Award.
Meanwhile, Mawere also urged national soccer team head coach Sven Vandenbroeck to remain focused and develop a strong team.
“So for now we will urge the coach (Vandenbroeck) to remain focused. Let him do his best and see the way forward for the team,” Mawere said.