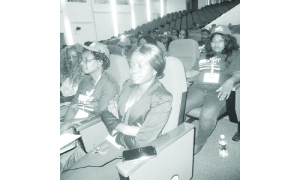 •WOMEN participant’s at the Women in Agriculture Conference in Lusaka recently. Picture by DOROTHY CHISI.