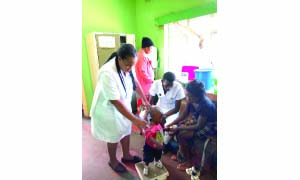 •Sister Racheal Samungole attends to a child during a routine under-five exercise at the Railway Clinic in Ndola. Picture by JESSIE NGOMA–SIMENGWA.