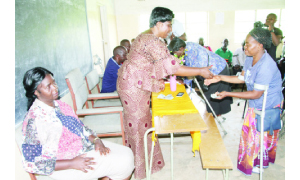 By CHRISTABEL CHIWILA  –
GENDER and Development minister Elizabeth Phiri says delays to distribute sanitary towels in schools is due to challenges in data mapping to capture the number of girls in each school.
Ms Phiri said data mapping was an important part of the task because schools in remote parts of the country needed to be captured too.
She said the ministry had cooperating partners that were ready to start the distribution of sanitary towels on its behalf but the only challenge faced was the data map capturing of girls in each school which would soon be in the process.
The minister added that it was important to know the total number of the girls in each school.
“The ministry is in the process of negotiating on meeting the demand, and cooperating partners are ready to start distributing on behalf of the ministry,” she said.
Ms Phiri further said last year Government had supported over 14,000 girls on the jewel project to keep girls in school, and provided them with all the requirements.
“Last year Government targeted 14,000 girls, on the keep girls in school project, but the number went beyond the target and reached 16, 500. So these girls are the ones benefiting from the jewel project,” she said.
She added that this year, the ministry was targeting 9000 more girls under the same project and urged more cooperating partners to come on board especially that the Gender and Development ministry had gone into sanitary towel giving to school going children.
The minister appealed to well-wishers and cooperating partners to come on board because education was the only way to achieve gender equality.
Ms Phiri said another challenge that a rural girl child was facing was the distance between school and home, and it was in that distance the girl child was most vulnerable.
She said Government was addressing the issue to ensure that dormitories were built to keep the girl child in school throughout until schools close.
In October last year, Parliament approved a motion raised by Chembe Member of Parliament Sebastian Kopulande that Government should provide adequate sanitation and sanitary towels to girls in public schools to ensure that their education was supported.