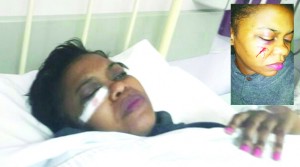 •NIZA Simbeye, the daughter of former Zambia Army Commander General Nobby Simbeye at CFB Medical Care in Lusaka after she was beaten by her boyfriend.

FORMER Zambia Army Commander General Nobby Simbeye’s daughter, Niza, is in serious condition at CFB Medical Care in Lusaka after being severely battered by her boyfriend over suspicion of flirting with other men.
Niza, 25, was almost killed by Jack Chipokola, who accused her of talking to other men during a friend’s wedding at Chamba Valley.
Apparently, Chipokola is married to another woman although he has a child with Niza.
The incident happened in the early hours of yesterday after the two, in the company of a family friend, arrived at Niza’s home in Chalala from a wedding ceremony.
A check at the hospital on Addis Baba Drive yesterday found Niza receiving treatment with a deep cut beneath her left eye as well as a swollen face sustained during the beating.
She narrated that Chikopola was annoyed with her because she was talking to other people at the weeding, who included family members.
“He was behaving strangely because even when I went to the ladies, he accused me of taking long in the toilet and asked me what I was doing,” said Niza from her hospital bed.
“When we arrived at (my) home, he started beating and kicking me until my friend called my sisters who told him to go when they arrived, since that time he has never called me back.”
This is not the first time that Chipokola has inflicted pain on his girlfriend (Niza) after the banker was reported to the police last year for a similar offence.
Niza said Chipokola had been a violent man and would now allow the police to act on his misdeeds.
Eye witness, Palito Mwenso, said Niza would have been killed had the couple been alone in the house.
“It would have been another Oscar Pistorius case where the only person who knows what really happened is the accused,” said Mwenso in reference to an ongoing case in South Africa involving paralympic athlete Oscar Pistorius, who shot dead his girlfriend.
“He was beating her as if he was beating a fellow man,” Mwenso said.
“We hope the law will take its course to ensure that women are protected.”
But when contacted, Chipokola said he was not aware about the incident and could, therefore, not comment.
“I don’t know what you are talking about, and I am not aware about that,” said Chipokola before hanging up on the reporter.
The matter has been reported to Woodlands Police Station.
The incident comes amid concerns of rising cases of gender-based violence in Zambia where women have either been injured or killed by their spouses.
It is estimated that Zambia has the highest number of GBV cases in the region followed by Zimbabwe and South Africa while Mauritius is at the bottom of the GBV records, according Gender Links.