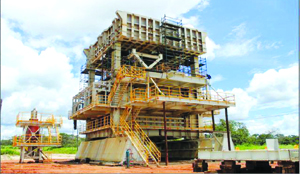 • A CRUSHER at the new mine in Kalumbila area.