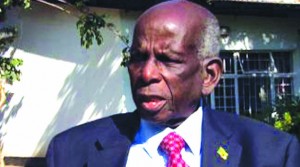 By MOSES CHIMFWEMBE-
VETERAN soccer commentator and sports journalist, Dennis Liwewe has died.
Mr Liwewe, 78, died at Levy Mwanawasa General Hospital in Lusaka yesterday where he was admitted for a liver ailment.
Meanwhile, President Michael Sata described Mr Liwewe as an icon who revolutionised Zambian football through his commentaries and many administrative roles he played.
His son Ponga confirmed his father’s death yesterday. He said the  funeral was being held at Mr Liwewe’s house in Woodlands.
“I can confirm that he (Liwewe) has died, he passed on this morning after battling with a liver ailment and funeral arrangements will be communicated soon,” he said.
The veteran commentator, who is survived by a wife Sylvia, four children and 11 grandchildren, excelled in journalism starting out in 1971 at the then Anglo-American Corporation, as a reporter on the mining newspaper – the Nchanga Drum.
He later rose to the position of assistant editor, and ultimately editor of the publication. Four years later, he was made public relations officer and in 1974, he moved to Lusaka as director of media and public relations at the Zambia Consolidated Copper Mines (ZCCM).
In a statement released yesterday by his Special Assistant for Press and Public Relations George Chellah, Mr Sata said he was deeply saddened by the death of Mr Liwewe.
He said his death was a great loss not only to the Liwewe family but to Zambia and Africa as a whole.
Mr  Sata said Mr Liwewe was a reservoir of knowledge in football and leaves a legacy of great patriotism and passion for sport.
The President further said Mr Liwewe was also a vibrant journalist who discharged his duties professionally.
“I have known Dennis for many years as a passionate football commentator who helped raise the standards of Zambian football to the level it is today. Dennis has been part of the country’s football journey through the many successes and challenges, and at no time did he drop his chin.
“It is my strong belief that upcoming leaders in sports can tap some wisdom from the life of this great son of Zambia. On behalf of the Government, the First Lady and indeed on my own behalf, I convey my heartfelt condolences and sympathies to the Liwewe family. I ask God to grant the bereaved family comfort and strength during this period,” he said.
Mr Liwewe, who was awarded with the Order of Distinguished Service in 1977 by first Republican President Kenneth Kaunda for his contribution to the development of soccer, had been involved in Zambian football for the last four decades covering more than 14 Africa Cup finals.
His passion for Zambian football saw him become one of the most moving eulogies on Zambian television after the 1993 Gabon Air disaster in which the entire national soccer team and plane crew members perished.
Fourth republican President Rupiah Banda described Mr Liwewe as a man whose inspiration transcended the Zambian borders.
Mr Banda, in a statement issued by deputy administrative secretary Kennedy Limwanya, said Mr Liwewe rendered great service to Zambia and his unmistakable voice inspired the entire southern African region.
“He was a good friend of mine and we travelled to many places together including Egypt when Zambia reached the Africa Cup final for the first time in 1974. I send my condolences to his family. The Zambian people loved him so much,” he said.
UPND president Hakainde Hichilema said the country faced yet another dark day following the death of the venerated veteran soccer commentator.
“In his own words, Liwewe would say, he eats football, drinks football and sleeps football. And true to these words, Liwewe was an embodiment of football, he was an encyclopedia of not only Zambian soccer but soccer in general but his passion lay with Zambian soccer,” Mr Hichilema said.