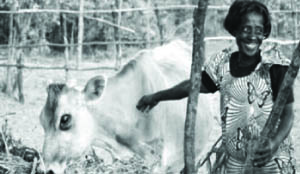 • One of the women who have benefited from Heifer International’s assistance.