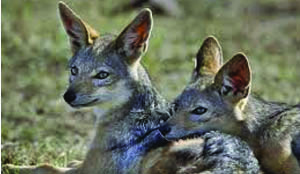 By KASONDE KASONDE –
JACKALS are terrorising people in Serenje District in Central Province and infecting them with rabies.
Serenje District Commissioner Charles Mwelwa disclosed that in the past three months, the jackals have attacked and infected five people with rabies.
“I can confirm that there are jackals that have invaded the district after running away from the bushes and are causing panic among the residents who are vulnerable to attack,” Mr Mwelwa said.
Mr Mwelwa said the jackals in the district have increased in number which has led them to leave the bush to stray into residential areas causing fear among the people and their pets.
He named the affected areas as Kanona, Kanyanja and Chitambo, which are on the northern part of the district.
Mr Mwelwa said on Monday a woman in Kanona area was attacked by the jackal but managed to kill it after it bit her by squeezing its neck before other people rushed to her and axed it.
He said the woman has since been admitted to Kanona health Centre where she was being treated for rabies.
“Once a Jackal attacks and bites someone it becomes weak and it’s easy to kill it, so far three Jackals have been killed,” Mr Mwelwa said.
He has since called on the Zambia Wildlife Authority (ZAWA) to go to the district and help control the jackals.
Mr Mwelwa has also appealed to the residents in the area to avoid bushy areas and also to move in groups.
A Jackal is a wild animal that looks like a dog has long legs and pointed ears, and lives in Africa and Southern Asia.