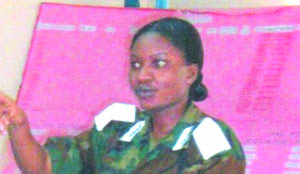 By JACK MWEWA-
SHE walks with a quick-march step of a military personnel, speaks with the confidence of an intellect, yet as accommodating as a mother.
Lieutenant Colonel Lillian Muwina is a female officer in the Zambia Air Force (ZAF), an Aeronautical Engineer, and holds a Masters degree in Thermal Power specialising in gas turbine technology from Cranfield University in the United Kingdom.
The 38-year-old daughter of Joyce and Austin Muwina Yambwa born in Mufumbwe, flagged-off school as a high flier earlier in primary school, finishing Grade 7 with a distinction (all ONEs).
She then hit best Grade 9 pupil the entire North-Western Province with a distinction and later best Grade 12 student at Mukinge Girls’ High School with a distinction in 1991.
Commenting on her days at primary and secondary schools, she said; “What inspired me really…? I am inspired by my father. As a child, we grew up not very well-to-do so to speak, but my father taught my siblings and I that we could become anything we believed.
Being a teacher (mathematician) my father never would settle for less in terms of our academic performance.
I remember that every day we had to do some mathematics and science exercises at home and if you got it wrong…trouble!
That did sort of encourage us to work hard in both mathematics, science and eventually we just loved mathematics.
We also had this culture in my parent’s home; all chores for all regardless of gender. There was no such thing as ‘girl’ or ‘boy’ things…we did everything together, from cooking, washing up, cleaning surroundings, etc.That’s everything that shaped the foundation of who I am today.”
At Mukinge Girls’, being a Christian school, the introduction to strong Christian values at a very tender age added more to her self-efficacy.
She said that the “I can do ALL things through Christ who gives me the strength” personalised slogan helped her to achieve anything she focused on to do.
Lt Col. Muwina does not to say she never encountered challenges; “much as there is no greater challenge for me as a woman working in a male-dominated field of aeronautics as an engineer, there is also no greater opportunity as exciting as working to register a woman’s capability in this sector.”
“I agree with one great woman who said “It’s all about having the will to win with anything. Things are never going to be perfect.
There’s always going to be some challenge that has to be overcome.
But those who succeed don’t wait around for perfect conditions. Successful women improvise.
They fight on and they refuse to lose. Winners never make excuses – they figure it out.
Having the will to win is the ultimate catalyst for success. It’s also about never taking success for granted.”[Meg Whitman, CEO-HP]
Her high achiever ‘syndrome’ led to her becoming the First female electrical/mechanical engineer at the Copperbelt University (CBU) graduating in 2004.
In her life, Lt Col. Muwina has either been “FIRST” or “BEST”…best student in project management, best student for junior command and staff course and first Zambian female aeronautical engineer, to name a few.
In 1994, Lt Colonel Muwina entered the ZAF Officers’ Military Training Course, again emerging best student (with distinction) in academics and later scored best student in aeronautical engineering in Israel with a distinction.
“The Officers’ training is designed to challenge you physically, mentally and emotionally as well as requiring the individual to quickly adjust psychologically to an unfamiliar way of life,” she commented.
This includes basic war skills, military discipline, physical fitness, drill and ceremonies, Air Force core values and a comprehensive range of subjects relating to Air Force life.
One’s commitment to self, to those close to you, and ultimately, the nation, was tested daily.
She said that Military training allows one to expand beyond limits and emerge with a deep sense of pride and confidence in one’s accomplishments and abilities.
After which you then clearly understand what sets the Military Academy apart from other colleges and universities.
Although she rightly qualifies as an intelligent woman, her great humility and sense of care for others distinguishes her from modern career women.
Lt Col Muwina says, “Military aeronautical engineering can be quite a challenge…, one needs to demonstrate evidence of a strong technical knowledge; ability to think creatively and innovatively.
A love and passion for aviation, aircraft and flight technology is inevitable. 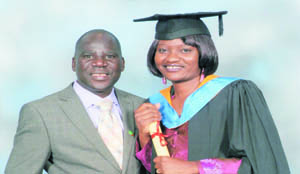 • Lt Col Muwina with husband Joseph Chishimba at her graduation from Copperbelt University.

In addition, one has to show elements of meticulous attention to detail; problem-solving and analytical skills; strong communication and team working skills; be able to work to deadlines with self-motivation and ability to cope with new demands and new problems.
As a woman, you have to go an “extra mile” than your male-counterpart to prove that you can.
A wife to Pastor Joseph Chishimba of Living Faith Missions Church and mother to Kutasha, aged 5 and Kudos aged 3, she clearly marks her boundaries as pastor’s wife, a mother, academician and military officer.
Work as an aeronautical engineer requires dedication and enthusiasm.
It can be stressful especially when deadlines approach and demands uncompromised precision, as the consequences of human error can be severe.
Therefore, a strong family backing has worked well to enhance her performance with her husband being tremendously supportive in all her pursuits.
She said, “my husband alludes to confidence (believing you can do it), focus (knowing exactly what you want) and direction (knowing how to get about) as three keys to strong motivation to do anything.”
‘Instead of looking at the past, I put myself ahead twenty years and try to look at what I need to do now in order to get there then.’ [Diana Ross]
Lt Col. Muwina’s new task is that of Lecturer at the Copperbelt University in the School of Engineering – Mechanical Department to pioneer the Bachelor (Hons) Degree in Aeronautical Engineering programme now launched.
She has before that, worked as deputy director research and development at ZAF Headquarters in Lusaka and first female commanding officer (Principal) for ZAF Technical Training School.She has also served as Deputy Director Aeronautical Engineering at ZAF Headquarters and various Engineering portfolios at the ZAF VIP Squadron in Lusaka.
In her tour of duties and studies, she has since enlisted membership to professional bodies including: the Institution of Engineering and Technology (IET –UK) in the United Kingdom; Royal Aeronautical Society (RAeS – UK); Institution of Mechanical Engineers (IMechE); Engineering Institution of Zambia (EIZ); Engineers Registration Board of Zambia (EngRB) as a Chartered Engineer. “Becoming a chartered engineer helps with career progression as it shows that a certain level of experience and knowledge has been reached,” Lt  Col. Muwina lamented.
With respect to EIZ, she was at the just ended elections, elected as Engineers’ Representative on the EIZ Northern Region Executive Committee (N-REC).Lt Col. Muwina is passionate about enhancing engineering standards in Zambia and looks forward to using her position on N-REC to lure young persons, particularly the girl child, into the Engineering profession.
My advice to women like Amy would be “ENJOY NOT JUST BEING AT POINT A OR POINT B but… ENJOY THE JOURNEY GETTING FROM ONE POINT TO THE OTHER.” ~Amy M.
Don’t be pushed by problems; be led by your dreams.