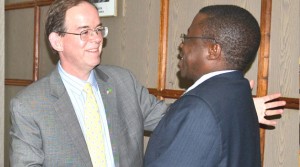 By STEPHEN KAPAMBWE-
THE Government has reiterated its position not to recognise gay rights, saying that gaysm runs counter to Zambian culture and is an affront to the Constitution which recognises Zambia as a Christian Nation.
Foreign Affairs Deputy Minister Gabriel Namulambe, who also urged foreign missions accredited to Zambia to respect the views of the country about gay rights, said Zambia would abide by Christian values.
Mr Namulambe said this when he held a closed-door meeting with visiting American deputy assistant secretary for Southern African Affairs Shannon Smith, who is in the country representing America’s State Department at the Ministry of Foreign Affairs.
Mr Namulambe, who was accompanied by Foreign Affairs Permanent Secretary George Zulu, told journalists after the meeting that the Government was duty-bound to protect and defend the Constitution.
“I want to make it very clear here that as Government, we have the Constitution to protect and in the preamble of our Constitution, Zambia is a Christian Nation and as such we live by the Christian values and we will not be able to recognise gay rights,” Mr Namulambe said.
“This is because it is untraditional to our culture, and we have appealed to our colleagues to respect our stance that as Zambians, we shall remain a Christian Nation,” he said.
Dr Smith, who was accompanied by American Embassy Chargé d’Affaires David Young, commended the Zambian Government on the majority of issues raised although there were some differences.
Among other things, the meeting discussed issues relating to the freedoms of the people of Zambia and the perceived violence reported in the country.
Mr Namulambe appealed to various political parties not to excite the outside world by making unwarranted statements about the perceived promotion of violence.
He praised Dr Smith and Mr Young for the fruitful discussion and urged all foreign missions accredited to Zambia and all the stakeholders in the country to dialogue and chat the way forward for the betterment of the country whenever differences arose.
And answering questions from journalists, Mr Zulu dispelled rumours that the American Government had tied aid to the recognition of gay rights.
Mr Young said the American government valued partnership with Zambia and would continue to co-operate with the Zambian Government on many issues.