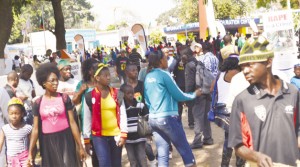 Trade Fair Roundup by REBECCA MUSHOTA and GETHSEMANE MWIZABI-
THE Ministry of Tourism has engaged the private sector in the tourism industry to make local tourism affordable.
Ministry of Tourism Permanent Secretary, Stephen Mwansa said at a Press briefing at the ministry’s stand at the ongoing Zambia International Trade Fair (ZITF) that Government wanted Zambians to be the main tourists in the country.
He said that Government has since engaged the private sector to make tourism affordable to locals.
Mr Mwansa said one of the reasons Zambians gave as to why they did not visit tourist attraction sites in Zambia was the high cost of lodging and transport.
“We are engaging the private sector to make it affordable for locals because if we increase the number of local tourists, then we increase our income,” he said.
Mr Mwansa also said Zambians needed to take tourism promotion personally by operating as the country’s marketers.
He said he and other permanent secretaries visited South Africa two months ago where they learnt that every citizen had a role to play in marketing the country.
“Each town had its own uniqueness that required marketing and the onus was on the local authorities countrywide to come up with places that could be treated as tourist attractions,” he said.
Mr Mwansa said many towns on the Copperbelt had mining pits that were no longer in use and those were the areas that could be turned into tourist attractions.
He said tourism if properly managed, was a potential employer in the country because it was mainly manually operated and so it required human resource.
The sector also overlapped with other sectors like transport and security.
He urged Zambians to take the words in the national anthem seriously and stand and sing of Zambia’s beauty, proud and free.