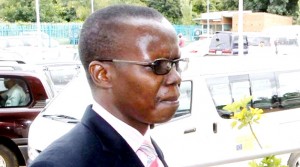 By PERPETUAL SICHIKWENKWE-
THE Lusaka Magistrate Court has warned that it will not hesitate to take action against former Ministry of Information and Broadcasting Services permanent secretary Sam Phiri and his co-accused, freelance journalist, Chanda Chimba if the duo fail to attend the next court session.
Principal Magistrate Obister Musikwa said yesterday that he expected Phiri and Chimba to be in court despite their lawyer having filed a notice of intention to adjourn their case.
This is in a matter in which Phiri and Chimba are jointly charged with former Information and Broadcasting Services minister Ronnie Shikapwasha for corruption related offences.
They are charged with abuse of authority, unlawful publication of a newspaper and possession of property suspected to be proceeds of crime.
When the matter came up for continued trial yesterday, Phiri and Chimba were not in court prompting the court to inquire about their whereabouts.
State prosecutor Martin Mayemba wondered whether the court had received a notice of adjournment on behalf of the two accused persons.
But Mr Musukwa said that filing a notice of intention to adjourn did not excuse the accused persons from attending court and as such, he expected Phiri and Chimba to be in court.
He adjourned the case to July 21, 2014.
Meanwhile, former Republican President Rupiah Banda yesterday failed to stand trial in a matter in which he is charged with abuse of authority relating to an oil deal with the Nigerian government because he is in South Africa attending to his wife Thandiwe who is unwell.
Banda  is facing one count of abuse of authority of office regarding a US$2.5 million oil deal which the State say did not benefit Zambians.
Particulars of the offence are that between May 1, 2008 and September 24, 2011 in Lusaka, Banda, being a person employed in the public service, namely President of the republic of Zambia, did abuse the authority of his office.
He allegedly procured a Nigerian government-to-government oil contract in the name of the republic of Zambia “which he in fact meant to benefit himself and his family.
But when the matter came up for continued trial before chief resident magistrate Joshua Banda one of Banda’s lawyers Steven Lungu informed the court that Banda was seeking an adjournment as he was out of the country.
Mr Banda adjourned the case to August 12, 1014.