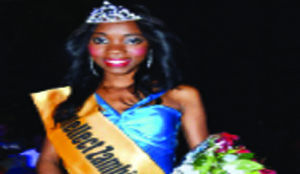 NINTEEN year-old Mulungushi University third year student Adawana Shantambi is Miss Intellect Zambia 2014.
Adawana who is pursuing a bachelor’s degree in commerce, could not hold her tears of joy as she collapsed upon her being declared winner in the tightly contested pageant during the early hours of Saturday at Lusaka’s Chrismar Hotel.
The newly crowned Miss Intellect, who outclassed 13 other hopefuls from different higher institutions of learning in Zambia, told DStv Entertainment that she was happy because her hard work had paid off.
She said with the authority now bestowed on her as Miss Intellect, she will try hard to find ways of working with the First Lady Christine Kaseba Sata on the fight against cervical cancer.
“I want to work with an orphanage but what is really prime for me is working with the First Lady in the fight against Cervical Cancer,” she says.
Adawana won herself among other prizes US$400 and a two-year contract with the Envogue models, a smart phone from city centre suppliers and a weekend for two at Chrismar Hotel in Livingstone.
Her runners up were Vivian Mwaba who was crowned First Princess and Melody Ndumba who got the Second Princess crown.
Tekela Kauzenu who received a lot of cheer from fans, especially the male folk, got the Miss Personality crown.
None of the contestants walked away empty handed as they were other goodies that were presented such as a one year driving course each courtesy of Mad Max Auto Spares, free hampers of lotions for the whole year and a Gym fitness membership at City Health and Fitness Centre.
Meanwhile, main performing music artistes of the night Macky 2 and Slap Dee had a nightmare of their evenings when sound was cut off during the performance.
Slap Dee did not even want to waste time looking lost on the stage as he opted to leave the venue. It was worse for the Kopala Swag coiner who did just half of his song before sound was again suddenly cut off.
When he jumped off the stage, he was mobbed by fans that were showing solidarity to him.
The latest sound interruption could not be fixed such that the winner of the pageant was announced through a dry voice.
Promising artistes also had their fair share as they mesmerised the crowd with their performances despite their songs being unfamiliar to most attendees.
Among the many upcoming artistes were Globlinz Empire and Revolutionaries (R.B.G).
Globlinz is a group of four artistes namely Narro, Icon Age, Havoc Deedz and OG. The ensemble started its music career when they met in school after some rap battles.
According to Narro (Babron Chambala) who is the group leader, the talented youngsters have also worked with musician Slap Dee on on their track called Kompo.
“DJ Mzenga man heard our single and called to work with us and produced our song called Stay which is currently making ‘noise’ on Radio and TV stations in the country.  I believe in five years time, Globlingz will be one of the hottest Hip HOP groups in Zambia,” said Narro.
The group draws its inspiration from award winning Zone Fam, Camp Mulla and Marky2.
Meanwhile, the Revolutionaries, a youth dance hall band flying under the Colours Red, Black and Green also thrilled the crowd with their
performances.
The band that was inspired by Buju Banton was formed in 2010 and has managed to share the stage with the likes of Jamaican reggae legend
Don Carlos and Addmirol P of Norway.