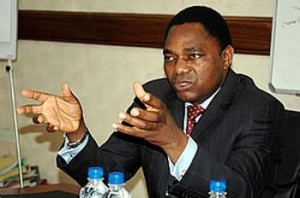 Mr Hichilema, who is United Party for National Development (UPND) president recently insulted Dr Scott in the media when commenting on the political violence that characterised the Mangango campaigns for the forthcoming by-election slated for August 19, 2014.

SACCORD executive director Boniface Cheembe said in an interview yesterday that it was wrong for political leaders to use vulgar language against each other in the political arena.

He said the people were eager to listen to ideas and manifestos that would help solve their problems based on the campaign messages from the leader.

“We appeal to political party leaders to adopt a non -violence communication approach in their politics,” he said.

He advised Mr Hichilema to take responsibility of his utterances and engage with Dr Scott whenever he was aggrieved.

“Politics should not be used as a vehicle for political injury but a platform of outdoing one another with what they can do to better people’s lives,” he said.

FODEP executive director Macdonald Chipenzi said political party leaders should engage in issue-based politics instead of insulting one another.

He said the foundation does not believe in the political leaders who were fond of name calling.

“People are not interest in name calling but want issue-based politics which would help shape their future,” he said.

Mr Hichilema branded Dr Scott with an insult during his campaign in Mangango and was yesterday broadcast on Hot FM Radio in Lusaka.