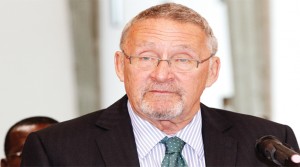 By SYLVESTER MWALE in Kaoma –

VICE-President Guy Scott has urged the people of Mangango Constituency to vote for Patriotic Front candidate Lyambai Lingweshi to speed up development in the area.

Dr Scott said when he addressed a rally at Limbotwa Primary School that voting for opposition political parties in the by-elections would not help in addressing development challenges.

The vice-President is in Mangango to drum up support for Mr Lingweshi ahead of the polls on Tuesday next week.

Dr Scott said the MMD was removed from power in 2011 because it could not perform and the ruling party would not want to take the same route.

“You chase people if they don’t perform this how democracy is. But it’s too early to chase the PF when the MMD was in power for 20 years, give us time because we have been in power for less than three years,” he said.

At the same rally Community Development, Mother and Child Health, Minister Emerine Kabanshi announced that the Government planned to extend the cash transfer scheme to cater for up one million households.

Ms Kabanshi said the Government wanted to roll out the scheme so that it could benefit more people including the people of Mangango Constituency.

Earlier, PF national chairperson, Inonge Wina urged the electorates to vote for Mr Lingweshi because that was the only way they would have accepted to work with President Michael Sata and his development agenda.

Meanwhile, Dr Scott has urged traditional leaders in the country to campaign for democracy by encouraging people to vote.

“I am not saying you should campaign for the PF or the MMD, but just to urge the people to vote, in fact in other countries refusing to vote is a crime,” said Dr Scott when he addressed a rally at Namimbwe Primary school yesterday.

Sub Chief Lyenzi Kakumbi of the Nkoya people thanked Dr Scott for visiting the area saying it was the first time a vice president had visited the school in 50 years.