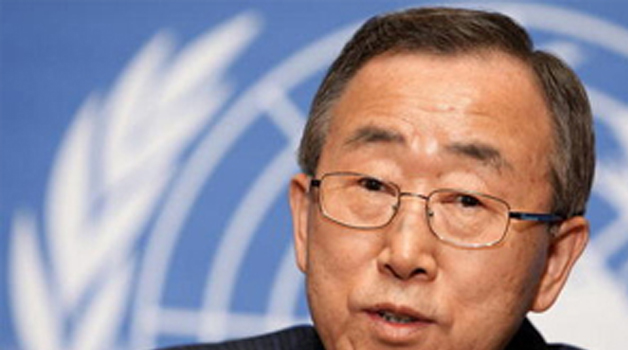 FROM CHISHIMBA CHISHIMBA,  New York, USA –
UNITED Nations (UN) Secretary General Ban Ki-Moon has called for accelerated efforts among African leaders towards restoring peace and security in order to foster sustainable development on the continent and beyond.
Mr Ban said that implementation of peace in Africa had been ‘too slow’ and that the scenario was worrying because some rebel forces had taken advantage to further their negative influence.
The UN Secretary General was speaking during the DPA/Africa Fourth Regional Oversight Mechanism (ROM) meeting at the UN headquarters ahead of the General Assembly debate.
Mr Ban said Africa, particularly in the Great Lakes Region, should disarm, demobilise and develop instead of wallowing in conflict which had affected the continent for a long time.
Among leaders in the audience were Zimbabwe’s Robert Mugabe, Yoweri Museveni of Uganda, Uhuru Kenyatta from Kenya and Joseph Kabila of the Democratic Republic of Congo (DRC) while Zambia was represented by Foreign Affairs Minister Harry Kalaba.
Angola and Rwanda were also represented by their respective Foreign Affairs ministers.
Mr Ban said the Great Lakes Region, in fact, needed greater peace and called on leaders to build trust among themselves as they undertook peace initiatives.
He called on the World Bank, European Union and the African Development Bank to help in enhancing cooperation, peace building and security in the region.
Mr Ban said Africa required a well-coordinated approach and ‘one voice’ in resolving conflicts and undertaking development.
African Union (AU) Commission deputy chairperson Erastus Mwencha said the continental body would continue to implement peace and security framework, particularly in the Central African Republic and South Sudan where conflict is still raging.
He said though that there was need for greater engagement in ensuring peace in the Great Lakes Region.
Dr Mwencha said the AU was committed to total peace so that the continent could concentrate on efforts to promote sustainable development. The gathering later went into a closed-door discussion.