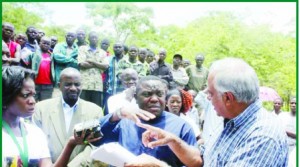 Mr Kalaba has since given the company, Lands Commissioner Barnaby Mulenga and principal land surveyor Charles Pole 20 days in which to rectify the land feud with the affected villagers.

Mr Kalaba said President Michael Sata and his Government would not allow anyone to be displaced from their land at the hands of investors or wealthy people.

“As I said earlier, no one, for as long as Mr Sata remains President, will be chased from their land,” Mr Kalaba said attracting cheers from the crowd.

They accused Sable Transport Limited and workers under its Bio-Carbon project of threatening to chase villagers found in areas it was conducting its business after February 3, 2014.

Mr Kalaba said it was because of such land conflicts that he recently banned the sale of customary land and Government was in the process of issuing title deeds to people in such areas.

He pleaded with people occupying customary land to guard it jealously and not to be hoodwinked by investors through being given foodstuffs and bicycles in exchange for huge tracts of land as doing so would cause them, their children and grandchildren to suffer in future.

Mr Kalaba also disclosed that the law was being tightened and Government would soon introduce a new Forestry Act aimed at controlling the indiscriminate cutting of trees.

Mr Chipungu said he was aware that former president Levy Mwanawasa cancelled Sable Transport Limited’ s title deed and also wondered why the company’s 10,000 to 15,000 hectares of land it acquired 15 years ago had continuously been expanding.

Sable Transport Limited managing director Alloo Iqbal promised to rectify the problem with the affected villagers by liaising with Mr Mulenga and Mr Pole and warned of stern action to Bio-Carbon Partners workers who would harass villagers.

Mr Iqbal said his company had challenged the cancellation of the title deed in court and won the case, adding that he acquired the land with consent from 12 headmen who eventually signed a sketch produced in March, 2001.