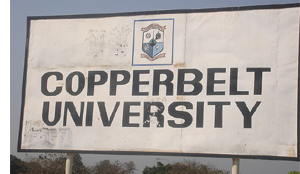 By MOFFAT CHAZINGWA-
FOUR Copperbelt University (CBU) students were yesterday apprehended following riots at the institution over unpaid meal allowances.
Meanwhile, Education Minister John Phiri has urged the students to remain patient as the meal allowances delay is being addressed.
Rioting students took to Jambo Drive in Kitwe where they burnt tyres and blocked the road with logs and rocks, disrupting flow of traffic.
The protests started around 11:00 hours in the morning when students held a meeting over their unpaid meal allowances but failed to reach a consensus on the course of action.
Some students then opted to take the protests further by blocking the road just outside the CBU campus, as well as the entrance to the institution.
Police quickly moved in and fired teargas canisters to disperse the rampaging students around 12:00 hours.
A check at CBU found the entrance to the campus blocked with logs and rocks, preventing any vehicle from driving in or out, while riot police kept vigil at the entrance to the institution.
Copperbelt deputy police chief Mukuka Chewe said four students were apprehended in the fracas.
“Some students took to the street and started burning tyres along Jambo Drive but Police quickly moved in and dispersed them,” Mr Chewe said.
Copperbelt University Students Union (COBUSU) president Gerald Chiluba said the students were aggrieved over delays by Government to pay them meal allowances.
“They were supposed to receive the meal allowances last week but to date they have not been paid and this is what has agitated the students,” Mr Chiluba said.
A student, who sought anonymity, said the delayed meal allowances had caused the students a lot of hardship.
“We have vowed from now onwards to boycott classes and continue with our protests until the meal allowances are paid to us because we can’t study on an empty stomach,” they said.
But Dr Phiri said delays by Ministry of Finance to release the funds for allowances, was being resolved.
He understood the students’ predicament because many of them were on Government bursaries because they came from families that entirely depended on Government support.
“We are frantically working with the Ministry of Finance to see that the money is released and the students get their allowances soon,” he said.
CBU public relations officer Grace Malunga said it was unfortunate that the students resorted to protesting, instead of seeking an audience with relevant authorities concerning their plight.