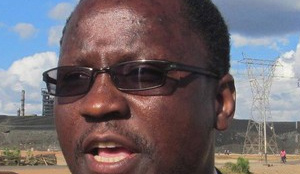 By ISAAC MUKANDO –
THREE youths have died in Mufulira after a wall fence collapsed on them following heavy rains.
The three were playing football at a local playing ground in Kansuswa Township when it started raining heavily prompting them to seek shelter near the fence.
Mufulira District Commissioner Chanda Kabwe confirmed the incident, which happened around 17:00 hours on Tuesday.
Mr Kabwe identified the trio as Steven Lwambela 21, of house number C97, Evaristo Mwansa 19, of C42 and Ezekiel Mukabila 16, of C23 in Kansuswa Township.
He said two out of the three boys died on the spot after being crushed by the fence, while one died at the hospital.
“The boys tried to find a place to hide after a heavy downfall but it is unfortunate that the wall fence fell on them claiming their lives,” Mr Kabwe said.
Meanwhile, a two-month-old baby boy has been admitted to Kitwe Central Hospital (KCH) after suffering from excessive bleeding and bruises following a backyard circumcision surgery by its mother.
Both the baby’s grandmother Agness Chalwe and KCH public relations officer Gray Chishimba confirmed the incident which happened in Chambishi Township on Wednesday last week.
Ms Chalwe, who was found at the baby’s bed side in Kafue ward, narrated that her grandson Francis Mubanga was admitted following an attempt to circumcise him by his 29-year-old biological mother.
Her daughter used a razor blade to circumcise the baby from home but that the procedure went wrong leading to excessive bleeding.
Ms Chalwe said she went to the market to buy groceries but upon her return, she found her daughter performing the surgery on her son using a razor blade.
“I found my daughter circumcising her son but she was just slicing the baby’s private parts without removing the foreskin and ended up causing excessive bleeding on the baby,” she said.
Ms Chalwe, however, said her daughter was not mentally stable and suspects that she could not have been well when she was conducting the circumcision process.
She rushed the baby to the hospital where he has been admitted since last week while its mother was detained by the police but later released.
The baby’s mother is also currently admitted at Chambishi clinic.
Mr Chishimba described the baby’s condition as stable and that he was responding well to treatment as the bleeding had been controlled.