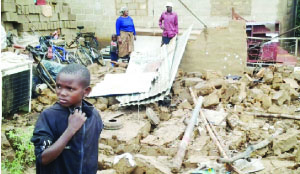 • A BOY stands near what used to be his home in Mazabuka which collapsed due to heavy rains on Wednesday.
Picture by EUGENE MUNYAMA

By CHILA NAMAIKO –
A HEAVY downpour in Mazabuka on Wednesday left a trail of destruction on infrastructure, with more than 120 families homeless after their homes were damged.
The families are now squatting in classrooms at Ndeke and Hillside primary schools.
Similar heavy downpour in Choma recently destroyed several houses at a Police camp, classroom blocks and shops in the town centre.
The victims in Mazabuka were from densely populated townships of Makalanguzu, Zambia and Changa-Changa whose houses were mostly built from mud-blocks and were destroyed by the storm.
District Commissioner Eugene Munyama said the number of victims could rise due to continued torrential rains being experienced in the area.
“Initially, the number of houses affected were 97 with an average of six per family but the number is expected to continue rising as there are still other people registering,” he said.
He said the Disaster Management Committee members visited the affected townships and discovered that most of the houses were constructed using mud-blocks.
At Mazabuka District Hospital, some iron sheets on a newly constructed theatre block, which was yet to be commissioned, were ripped off by the heavy rains.
Mr Munyama said the theatre block was constructed with funding from the Lottery Club of Italy in conjunction their counterparts in Zambia at a cost of more than K200,000.
“There were no fatalities or injuries recorded except for some power lines that collapsed, causing disruption of power in Monze, Pemba, Chisekese and Gwembe areas,” he said.
Mr Munyama hailed some institutions and companies for their swift response to support Government in aiding the victims through donation of foodstuffs and funds.
The DC assured the victims that Government was doing everything possible to assist them through provision of temporal shelter and food.