BY JOWIT SALUSEKI –
ZAMBIAN born Danish artiste Thomas Muchimba Buttenschon has embarked on a journey to produce a film titled Doing my Drugs,  to raise awareness about the importance of taking ARV’s by people living with AIDS. 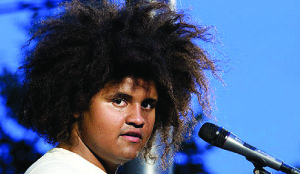 Thomas who is HIV positive but whose wife and two children are free of the HIV virus tells Times Weekend Entertainment that he has been working on the film for the past two years and the movie is expected to hit the screens by September 2016.
He is working with a crew from Whalefilm, a Television, film and photo firm of Denmark and very soon the team will be heading to Los Angeles (USA) to produce the sound track to the movie.
The shooting of Doing my Drugs has continued to be done in selected locations both in Zambia and Los Angeles, California, in America.
‘’ I chose to shoot the film in Zambia because it is my late mother’s country so that Zambians can understand that  as artistes and writers we have a big impact to influence people on issues that affect  many lives.
“For instance, Maiko Zulu not too long ago worked on a song entitled Mad President which  to some people was controversial, yet the track had a positive message in it,” explains Thomas.
On the local scene, Thomas has incorporated artistes such as Chris Aka, Moses Sakala, Maiko Zulu and Danny, among others. The crew last weekend were busy with their work, filming Danny’s music concert (as the singer preaches about HIV and AIDS) staged at Lusaka’s Mumana Pleasure Resort.
Thomas, whose father was from Denmark, has lived in the Scandinavian country since 1986, while some of his half siblings reside in Lusaka’s Kaunda Square Township.
Whalefilm director Tyler Rosen was full of praise of Thomas.?Thomas lost both his parents some years ago then before the ARV’s became popular in the treatment of HIV and AIDS .His father passed on in 1994 while the mother died a year later.?He has also produced five studio albums which are all in Danish.