IG orders Nkwazi to win back promotion
Published On January 26, 2014 » 2541 Views» By Hildah Lumba » Others, Sports
0 stars
Register to vote! 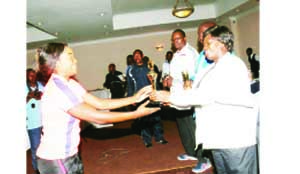 •INSPECTOR General of Police, Stella Libongani (right) presents the 2013 Sportswoman of the Year award to badminton ace, Olga Siamupangila during the Zambia Police Service annual awards ceremony at Sandy’s Creation in Lusaka at the weekend. Picture by JEAN MANDELA

Libongani said Nkwazi, who were demoted to FAZ Division One League last season, belonged to the elite league and it was not in order for the ‘Policemen’ to be featuring in the lower ranks.

Speaking during the Zambia Police Annual Sports Awards ceremony for 2013 held at Sandy’s Creation on Saturday night, she said of all sporting clubs under the police command sponsorship, only Nkwazi had a negative report of demotion, one year after winning promotion.

“My message to Nkwazi football club players is that work hard so that the team gets back to the Premier Division, where we belong. I want to receive a good report from the Director of Sport at the end of this season that Nkwazi will be playing in the Premier Division next year,” she said.

Libongani was, however, happy that other sporting disciplines did well and brought honour to the sponsors, highlighting successes of the volleyball, chess, judo, tug-of-war and netball teams.

She said it was gratifying to see that of the four teams that the Zambia Police command sent to the Southern African Region Police Chiefs Corporation Organisation (SARPCCO) Games in Namibia, three of them brought bronze medals through netball, athletics and football.

And Libongani said it was the responsibility of the Zambia Police Service to help Government push sports forward by producing good sportsmen and women who could represent the country ably in international sporting competitions.

Libongani also awarded various prizes to deserving sportsmen and women with chess star, Gillan Bwalya winning the Sportsman of the Year award while badminton ace, Olga Siamupangila was the Sportswoman of the Year.

Bwalya had earlier picked up the best chess Player of the Year award with the most Promising accolade taken by Kelvin Chumfwa while Sunday Mubala and Enock Mulemba got similar awards in basketball.

The Footballer of the Year award went to dimunitive but exciting Nkwazi midfielder Noah Nyirenda while Gilbert Tembo was awarded the Most Promising Footballer award while the women football (Nkwazi queens) honours were scooped by Masala Katongo and Joyce Nachisambwe.

The winners from boxing were Philemon Hara and Chama Chama while the Best Athlete was Emmanuel Mwewa and the Most Promising being Yvonne Nalishuwa with the netball’s awards going to Doreen Kasehela and Mooka Mukiti.

The best judoka and rugby awards went to Pelvin Lipanda and Andrew Mwape respectively while the Most Promising accolades in the same disciplines went to Isaac Likonga and Leonard Malipenga respectively.

Some of the recipients were Mwandu Chindima and Stephen Ikabongo who were the best and most promising volleyballers of the year in the male category while Carol Nyondo and Joyce Muteka were the winners in regatta.

Darius Lweo was voted as the best player from the young Nkwazi football club while his senior coach Chris Kaunda took the best football coach award. But the overall best coach in the Zambia Police setting went to judo coach Moola Limpimile and the best administrator being Maybin Chinama and Milton Mweemba taking the best referee award.