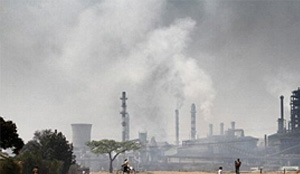 By JAMES KUNDA –
MOPANI Copper Mines (MCM) will complete the third and final phase of upgrading its Mufulira Smelter in the first quarter of 2014.
This is to ensure increased capture of sulphur dioxide and reduce emissions that cause harm to the environment surrounding mining activities in the area.
MCM spokesperson Cephas Sinyangwe said in a statement that the company invested over K 2.3 million in upgrading the Mufulira smelter over three phases to reduce sulphur dioxide emissions by 97 per cent in 2014.
“Mopani has invested over K 2.3 million into the upgrade of the Mufulira smelter to address the legacy issue of sulphur dioxide emissions.
This upgrade will greatly reduce the sulphur dioxide emissions that have affected the area for over 70 years, with 97 per cent of emanation to be captured bringing operations in line with international standards,” he said.
Mr Sinyangwe said the Mufulira smelter was built in 1937 and little had been done to maintain or update its processes to bring them to international standards.
He said when Mopani began to operate this asset in 2000, the company was committed to upgrading the smelter to reduce gas emissions in line with international standards.
“The project was divided into three phases, the first two stages were completed in 2007 and 2009 and involved replacement of the existing electric furnace with Isa Smelter, construction of the first acid plant and installation of new bigger anode furnaces and twin anode casting wheels, resulting into sulphur capture of up to 51 per cent.
The third and final phase is currently underway and is scheduled to be completed in the first quarter of 2014, fifteen months ahead of the deadline and it involves Installation of three larger converters and a second Acid Plant,” Mr Sinyangwe said.
He said other than reducing the levels of sulphur emissions by an average of over 51 per cent so far, the Smelter Upgrade project has generated many additional benefits for local people, with over 400 Zambians working on the project.