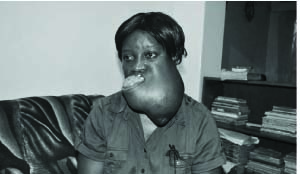 THE early childhood life for 46-year-old Doris Mwamba of Kitwe was all fine until at the age of 18, when something that looked like a pimple popped out on the left side of her face.

For Doris, this was nothing but just a pimple which she saw no reason for paying attention to as she was convinced it would soon disappear.

But alas, Doris was totally mistaken as she came to learn afterwards that what first appeared as an ordinary pimple would in no time turn out to be a tumor that would torment her for years to come to the point where she has now been confined to seclusion from normal public life.

This is all because of the tumor, which has overgrown and is now covering her mouth. It extends through to the chin causing her face to be deformed with the lower jaw now protruding from the mouth such that one needs not be faint-hearted to take a second glance at her facial outlook.

A glance at Doris, who was found at her parent’s residence at house number six, Hippo Street in Nkana East, was enough to tell how much weariness and frustration in addition to the anguish the tumor has weighed on her daily life.

With a lot of difficult and pain, Doris recounts how this dreaded tumor started in 1982 and the kind of hell she has been made bear day-in-day-out.

“I was at Mumbwa Secondary School doing my form one in that year when something like a pimple sprang on the left side of my face.

“I didn’t pay any attention to it because I didn’t feel any pain,” says Doris while covering her mouth to prevent the protruding jaw from showing.

Doris said it was until she returned home still Nkana East in Kitwe for holidays that her father, Dominic Mwamba noticed a swelling on her face prompting him to ask if she had a toothache.

“Because my father was very particular with issues of health, he organised an appointment for me to go and be examined by a medical doctor at Nkana Hospital, which is now Chinese-run Sinozam Hospital in Nkana West,” Doris said.

She remembers too well how after undergoing an x-ray scanning was admitted at the hospital to facilitate operation of the pimple-like growth.

“I had an operation on the May 11, 1982 which is my father’s birthday and I stayed in hospital for a month before being discharged and I didn’t go back to school,” she said.

Doris said the next time she went to Mumbwa Secondary School was to get a transfer as a doctor whose name she recalls as Dr Rea who operated on her recommended that she should be nearby for observation purpose.

She said the operation healed in October the same year and later enrolled at Ndeke Secondary School to continue with her education and from there went to Luwingu Secondary where she started in form three.

“For some time, I thought I had healed until 1992 when I saw the same pimple resurface on the same spot.

“I stayed with it until 2003 when I started feeling some pain in my mouth and in July the same year, I started experiencing a fever and that was the beginning of hell on earth for me,” she said.

Doris said her father immediately arranged to have examined by a surgeon who after studying the x-ray referred her to University Teaching Hospital (UTH) in Lusaka.

She said this after the surgeon discovered that the problem required extracting the entire gum on her left jaw.

“The surgeon was ready to extract the gum but the challenge was finding a replacement for it if was to be removed,” she said.

Doris said she nonetheless managed in August the same year to go UTH where a medical examination was conducted on her but that she had to wait for four months for outcome of the results, which however, did not reveal what really the problem was.

She said from 2003 to 2006, she continued running from one medical centre to another in search of medical answer to the growth which in the meantime had continued to grow in size and was now discharging pus.

“In 2006, I went to a private surgeon but when he told me that he could do an operation on me from the table, I got discourage and I declined to that especially that the first one took long time to be conducted,” she said.

Doris said after that, she stayed from 2006 until 2008 when she sought for another medical attention and this time at Ndola Central Hospital where there was some visiting doctors from the United States who unfortunately could not work on as they didn’t have the necessary equipment to conduct the operation.

She said following that, she had been to see several medical practitioners in Government and private health institutions but to no avail.

handle the problem,” she said.

Doris, however, said the constraint to that were finances looking at the money involved in undertaking a trip to India for medical attention.

“Last year, we sent pictures to Fortis Hospital in India and they agreed that they could conduct an operation but then the involved cost was K90,000 including accommodation for two people but then we don’t have that kind of money,” Doris said.

She said she was now beginning to believe her medical condition was spiritual because of the fruitless attempts to have it healed in health institutions including UTH.

“I have now sort of lost hope and I have said to God let me suffer it this is His will. I have now been engaged in prayers with the support of other people including church members,” she said.

Doris, who last year in July clocked 10 years of ceaseless pain caused by the tumor, has found the going unbearable especially that this has adversely affected her two children, aged 21 and 19 who have since been long abandoned by their father.