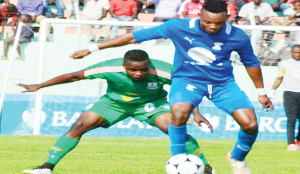 CHAMPIONS Zesco United have vowed to fight hard and retain both the MTN-FAZ Super League and Barclays Cup titles this season.
After brushing aside Kabwe Warriors with relative ease and booking themselves a place in the 2015 Barclays Cup semi-finals, Zesco quipped they would defend the league and cup championships.
In a post-match interview, Zesco assistant coach Tenant Chembo said that his side’s intention from the start was to win the Barclays Cup and the league title, the two trophies they were currently holding.
“We have two objectives this year and that is to win the Barclays Cup and the league title, that is our focus and we shall fight for those two. Kabwe Warriors was tough but we are happy we absorbed the pressure well and got the win,” he said after Zesco won 2-0.
Zesco scored two early goals through Mwape Mwelwa and Jackson Mwanza and then took the foot off peddle and saw off a comfortable win which however, did not sit well with Warriors’ coach Mohammed Fathy.
Fathy said Warriors conceded two avoidable goals and that apart from those two strikes, there was nothing in the game that could separate the two sides.
“I think my boys did well. We made two mistakes and Zesco United scored from those but apart from that, we were just as good or even better. In the second half, we changed the system and played with three defenders and then five midfielders and we were the better team.
“I will re-enforce the side with one defender, two midfielders and a striker and we will be just as good as any top premier side,” Fathy said.
Warriors was one of the two Division One sides that were in this year’s Barclays Cup but both were knocked out. Lumwana Radiants lost 0-3 to a rampant Zanaco.
Lumwana coach Allan Kamwanga, a former Mufulira Wanderers and Chipolopolo defender, admitted the Division One North leaders could not match Zanaco and promised to boost it with about three players ahead of promotion to the Premiership.
The Solwezi side conceded from three set pieces which Kamwanga said was an area he needed to work on and was hopeful he would make history by qualifying the first team from North-Western Province into the Super League.
Zanaco coach, Mumamba Numba said he was happy that his charges managed to brush aside Lumwana who were topping Division One north.
Despite making the semi-finals, Numba was livid with the manner his players approached the game especially in the first half, saying there was a lot of individualism but after half-time pep talk the play changed.
He warned that Zanaco wanted to enter the history books by also joining the clubs that have lifted the Barclays Cup.
Meanwhile, KALUMIANA KALUMIANA reports that Power Dynamos management has slammed the team’s early exit from the 2015 Barclays Cup.
The two-time Barclays Cup champions were booted out at the quarter-finals stage by Green Buffaloes who beat them 5-3 on post-match penalties following a scoreless draw at Nkoloma Stadium in Lusaka on Saturday.
It was the second successive season that Power were eliminated at the same stage of the competition with Nkana ejecting them 2-0 last year as silverware continues to elude Tenant Chilumba’s two-and-a-half-year reign at Arthur Davies Stadium.
Power club secretary Ricky Mamfunda said in an interview in Kitwe yesterday that a thorough review of the teams’ performance has been instituted.
“Power Dynamos management is extremely disappointed at the early exit of the team  from the 2015 Barclays Cup,” Mamfunda said.
“We shall be issuing a comprehensive statement soon on the performance of team. My office wishes to appeal to our fans and supporters out there to remain steadfast as we carry out a postmortem on the current performance of the team.
“We maybe out of the Barclays Cup but we shall fight to the end in order to play continental football  next year. We still have six games before the end of the 2015 season and the complexion of the league standings will change after week 30 games.”
Power, who finished second in 2014, are third on 47 points and eight points behind leaders and defending champions of both the league and Barclays Cup, Zesco who have a match in hand.