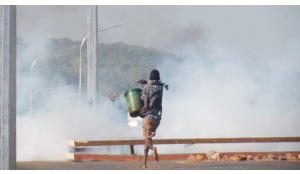 •A BOY is captured running with a bucket during riots in Chipata yesterday. Tenants ran amok on the Great East Road, protesting evictions from houses owned by Contract Haulage. Pictures by VINCENT SOKO

By JULIUS PHIRI –
TWENTY FIVE people in Chipata, Eastern Province, have been apprehended following protests over an eviction order for squatters who had settled on a piece of land belonging to Contract Haulage.
The squatters of farm number D/25/K/1/F belonging to Contract Haulage ran amok and blocked the Great East Road after the eviction order was granted by the High Court.
Police in riot gear, took charge of matters as the riot ensued affecting traffic on the Great East Road, where the protesters burned tyres causing members of the public to scamper for safety.
Eastern Province Police chief Eugene Sibote said police took to stop the rioting on Tuesday evening.
He said some of the people who were in the farm were not employees of Contract Haulage and that they were not entitled to the land.
Mr Sibote said the squatters were supposed to get the land in a normal way instead of illegally occupying it, which belonged to their former employer, Contract Haulage.
He said the former employees were rewarded with the houses as part of their terminal benefits after the CH went under.
“About 49 CH former workers went to court and in court, they agreed with CH to get the houses on farm number D/25/K/1/F as part of their terminal benefits and they agreed to pay K10,000 but these people have no problem despite not paying the money but the squatters who built houses are the ones who rioted,” he said.
Mr Sibote said more people were likely to be apprehended and would appear in court soon.
He said calm had since been restored.