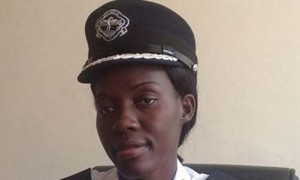 Lyainga, 30, who was also a Zambia Air Force (ZAF) officer, died on Monday at the University Teaching Hospital (UTH) in Lusaka after he was stabbed by some unknown people following a fight in Kuku area of Chawama Township.

It is believed that Lyainga, who also played for Power Dynamos, went to have a drink in Kuku on Monday around 10:00 hours but picked up a quarrel with a patron, who opted to call for backup and the reinforcement stabbed him in the leg and ribs.

According to Zambia Police Service spokesperson Charity Chanda, Lyainga managed to go to Chawama Police Post where he got a medical report before proceeding to UTH to receive attention on the wounds but died around 20:00 hours.

She said Simpese was apprehended to help with investigations while a manhunt has been launched for the other suspects.

And Red Arrows chairperson Katavya Banda expressed sadness at the death of Lyainga, who had been recalled to the club for the 2014 soccer season.

Major Banda said in an interview that Lyainga’s death was a big loss to the club as he was one of the experienced players Arrows was hoping would help inspire the side this season.

“It’s a great loss because we hoped he would contribute towards Arrows attaining success this season as he was an experienced player who once played for us but had gone on loan before we recalled him,” he said.

Lyainga was a regular call up for Herve Renard during his first tenure as Chipolopolo coach in the 2008 and 2009 soccer seasons when he made exciting partnerships with Judge Mkandawire and Whiteson Simwanza.

He was on target in Zambia’s 2-all draw against Libya in an international friendly match played on May 28, 2008 in Tripoli at the Stade du 11 Juin. The match was Herve Renard’s first international engagement at the helm of the Chipolopolo.

Lyainga was also part of the 2008 Cosafa squad before he was dropped from the 2009 Chan team.

The player was due to make a return to Arrows this season but had missed Monday training session and the airmen’s Samuel ‘Zoom’ Ndhlovu Charity Shield 2-1 victory over Zesco United.

Meanwhile, Deaf Association of Zambia president Prosper Mulinda has died. Mulinda, who was in December last year honoured by the Sport-In-Action (SIA) during the Sport for Development Awards for his contribution to sports as a volunteer.

Mulinda’s death was announced by Sports Council of Zambia (SCZ) board member Matilda Mwaba on her Facebook page.

“Funeral Notice, sadly we have lost the Volunteer of the year Mr Proseprous Mulinda, who passed away in the early hours yesterday (Monday). Funeral is being held in Kanyama. SCZ is doing everything possible to assist, as he has no family or friends to assist with the burial arrangements, those in the sporting community will remember the ever-cheerful energetic