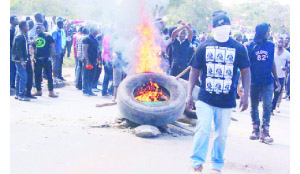 •PROTESTING students at the Copperbelt University burning tyres on the road to express their grievances.

SOME people may feel that Government’s decision to close the University of Zambia (UNZA) and Copperbelt University (CBU) will disrupt the students’ education.

But the closure may actually help the students realise that universities are not platforms for expressing grievances through riots and destruction of public property.

This is because riots at the two public universities seem to have become the norm.

Whenever students feel they have needs which require attention, they resort to throwing stones and disturbing the same members of the public who fund their institutions through tax.

Whereas the students have a right to express themselves and protest, their actions should not go to the extent of destroying both public and private property and disturbing the peace of the nation.

In fact, the students need to come out clean in this issue because in most cases, the students are used as pawns by political elements who do not get affected when the universities close.

For example, reports indicate that many UNZA students were against the idea of participating in the protests which led to the current closure of the institution.

Some students who spoke on condition of anonymity said shady individuals who could not clearly identify themselves as students, went around the Great East Road campus to request the students to protest.

“Most of the students were against the idea of protesting because they did not understand what they were supposed to protest for.

They were just being asked by some people who were not even clearly known to protest in solidarity with the students movement but about what, we did not know,” one student said.

The students talked to said it was possible that some unknown individuals could have been paid to influence a few students at UNZA to start the protest which led to the closure of the institution.

“Most of the students were in their rooms and they were surprised when they heard that the university had been closed,” a female student said.

Reports of political elements stirring up the students to protest were further given credence by suggestions that ten cadres of a known opposition political party where among the over 50 students arrested for running amok at the CBU early this month.

In fact, students, who benefit from the Government bursary scheme, are in the minority.

The majority of them are on private sponsorship who either pay for themselves or are paid for by their employers.

These, together with mature entry students, would rather concentrate and complete their studies on time rather than become liable to activities that would only serve to prolong and make it more costly to finish their programmes.

According to Higher Education Minister Michael Kaingu, student riots lead to destruction of property and retardation in their education.

Student riots also result in damaged private and public property which cost money to repair, the same money that can even go towards maintenance of the same universities.

Dr Kaingu said the Government had realised that students, especially those on full Government sponsorship, were a problem to the public compared to self-sponsored students who concentrated on their studies.

Never the less, the students’ behaviour showed that resorting to riots had become a dangerous culture because in the recent disturbances prior to the closure of the two universities, the students – at UNZA in particular – were given part payment of their meal allowances.

Therefore, it would have been sensible for them to patiently wait for the balance.

It is indisputable that the few students on the Government bursary scheme need to have allowances for upkeep.

But the fact that they are not the ones who foot the cost of their education has made them irresponsible to the point, instead of being grateful for getting educated at the tax payer’s expense, they destroy property paid for by public resources and stone members of the public whose tax runs the public institutions.

How possible is it then that the country can develop if such are the individuals that would in future be in charge of safeguarding the same public property they are destroying?

UNZA’s Chalwa Kasanda said the advent of rioting started way back at the inception of the two universities.

Professor Kasanda, who is one of the lecturing staff, said most students thought riots were the most reliable way of showing grievances.

“I speak as a lecturer as well as a former student. It is not right to break public property or to vandalise such property because it shows that the students are not thinking straight,” he said.

Professor Kasanda said the Government and stakeholders need to look at the main cause of disturbances rather than resort to closing the universities.

He said some students did not participate in the riots and yet they seemed to be the ones who get victimised by police.

But UNZA lecturer Samantha Mtolo advised students on bursary to plan for eventualities such delays in allowances instead of always resorting to unorthodox means of airing grievances.

“Sometimes, we blame the Government for not giving the students on bursary their allowances, even saying the Government does not care about students.

“But when Government delays, why can’t the students look for other options? They come from homes and perhaps could call their parents to send them some little money while they wait for their allowances in that period,” she said.

Ms Mtolo said if the students valued the importance of education, they would be motivated to ignore delays that they are ever protesting about.

“Valuing the importance of school always brings about the zeal for students to overlook certain hold ups at an institution.

“Once students concentrate only on completing either their degrees or diplomas, they would not be distracted from performing well even when faced with various predicaments,” she said.

University of Zambia Students Union (UNZASU) president, Jones Mwawa expressed displeasure at the fact that the students rioted over meal allowances when they had already received part payments.

“I, as UNZASU president, pleaded with the students not to riot but my efforts were futile as I cannot manage to stop a large number of students from rioting,” he said.

He urged President Edgar Lungu to re-open the universities as the closure had taught the students a lesson.

Some parents of the effected students pleaded with the ministry of Higher Education to forgive the students by opening the universities.

Mercy Bwembya, a mother of one of the aggrieved students, said she was not happy with the students’ behaviour.

She pleaded with Government to forgive the students whose programmes would be delayed by the closure.