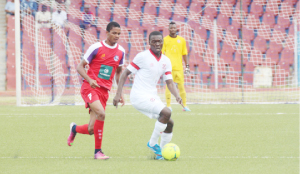 Swallows 2 Nkana 0
A moment of ‘madness’ saw Nkana concede two goals in a space of four minutes against Mbabane Swallows yesterday as the Zambian envoys kicked off their 2014 CAF Champions League on a poor note.
Making a return to CAF’s elite club competition where $1.5 million is at stake for the winners, Nkana had no answers to Swallows’ second half goals that left them with an uphill battle of scoring three unanswered goals in the return leg to advance to the next round.
“We just gave them the game with defensive errors. We just have to work on errors. The artificial turf also took a toll on our ball control,” said Nkana coach Masauso Mwale after the match.
Mwale said Nkana just gave Swallows the game by causing costly defensive blunders which the Zambian team need to rectify before the return leg.
“But we are still in the game; it will be a different ball game at our own turf. We can make it happen, we saw the way they are playing,” Mwale said.
Swallows took the lead on 62 minutes through Zimbabwean striker, Kudzanayi Matanda, who rattled the net with a volley to break the deadlock.
Four minutes later, Felix Bardenhost doubled Swallows’ advantage when he beat Nkana international defender, Christopher Munthali after racing into the box.
With two goals in the bag, Swallows had nine men behind the ball as Nkana took the game to the Swazis. On 71 minutes, Nkana goalkeeper, Rabson Mucheleng’anga managed to salvage a Tony Tsabedze shot following a counter-attack.
Mucheleng’anga again saved Nkana’s blushes, parrying away for a corner a shot from the edge of the six yard box by Bardenhost in a one-on-one situation.
As time ticked away for the desperate Zambian champions, Mwale was forced to substitute 2013 MTN Premier League top scorer, Ronald ‘Sate Sate’ Kampamba for Jimmy Ndhlovu but the move yielded no change upfront.
With four minutes remaining on the clock, Shadreck Musonda saw his ambitious shot go high and on 88 minutes, Lottie Nyimbili, a 55thminute replacement for veteran striker Francis Kombe, had his effort from outside the penalty area saved by the Swallows’ Zimbabwean goalkeeper, Jim Knowledge.
On the stroke of full time, Matanda failed to complete his brace face-to-face with the goalkeeper off a Bardenhost lay-off as Swallows held tight at the back to ensure they secured a vital first leg win.
Nyimbili almost put Nkana ahead on 58 minutes with a back heel but Knowledge managed to save the danger.
The first half saw Nkana put Swallows on the back-foot with Kelvin Mubanga’s shot on 38 minutes, after being put through by Kombe, came off the defensive wall while Kampamba watched in awe as his curling shot flew just inches wide of the far post four minutes into the break.