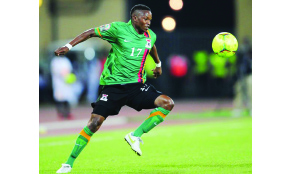 By SANDRA MWILA and ADRIAN MWANZA –
CHIPOLOPOLO captain Rainford Kalaba says the Chipolopolo should be wary of Guinea-Bissau.
Zambia was again drawn alongside Guinea-Bissau but this time in Group K of the Cameroon 2019 Africa Cup of Nations (AFCON) qualifiers with
neighbours Mozambique and Namibia completing the list.
Guinea-Bissau shocked bookmarkers to top Group E on 10 points to qualify for the 2017 AFCON edition while Zambia finished third on seven points. Congo Brazzaville ended in second while Kenya was bottom.
Kalaba said in an interview from his base TP Mazembe base in Congo DR that the AFCON draws were fair but there was need to be wary of Guinea-Bissau.
“The only interesting team that I am looking forward to playing is Guinea-Bissau, all the teams in the group are strong but what Guinea-Bissau did to us still pains me,” Kalaba said.
The tiny nation held the Chipolopolo to a barren draw at Levy Mwanawasa Stadium in Ndola before inflicting a 3-2 defeat in the reverse fixture to end Zambia’s slim hopes of making the 2017 AFCON finals.
And that is the reason Kalaba is urging his team-mates to take the qualifiers seriously to avoid missing out on the 2019 edition.
“This time around we will take the games seriously and qualify. At the moment we have a very strong team and we have learnt a lesson from the last edition of qualifiers,” he said.
Midfielder Chisamba Lungu said the Chipolopolo will qualify to the Cameroon 2019 AFCON finals at all cost.
Chisamba said the Chipolopolo will not underrate or overate any team during the qualifiers but work extra hard to qualify.
“We are going to qualify at all cost. We shall not play names, football is played on the pitch,” the Russia based midfielder said.
Former Chipolopolo coach George ‘Chicken’ Lwandamina said the team will have to prepare adequately to qualify.
“In modern football there are no small teams and what we just need to do is to prepare adequately to qualify,” Lwandamina said.
Ex Football Association of Zambia (FAZ) president Kalusha Bwalya has said Zambia has been drawn in fair group.
Kalusha said the team have high chances of topping the group adding that competition is always tough but that what was important is starting with a good result to set the tone.